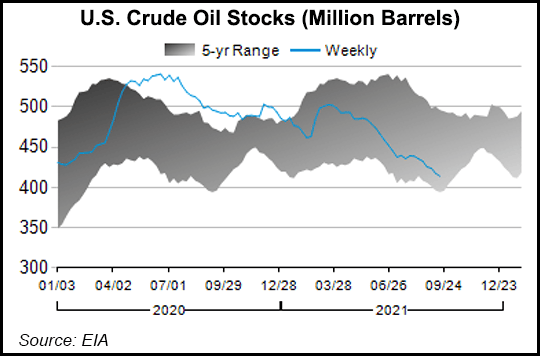 The storm hit the GOM on Aug. 29. It initially knocked out nearly all production in the region and kept the majority of oil output offline through early September. The recovery is ongoing, but federal estimates show that more than 80% of production is back online.

Output had plummeted in the week ended Sept. 3, dropping from 11.5 million b/d pre-Ida.

Total petroleum consumption over the past four-week period averaged 21.0 million b/d, up 18% from a year earlier, reflecting the United States’ resilient economic recovery amid coronavirus vaccine programs. Despite festering concerns about the Delta variant of the virus and rising case totals over the summer, consumption of travel fuels continues to climb, extending a months-long trend.

With demand solid, U.S. oil stocks further declined, lengthening a long run of withdrawals over the summer months. Crude inventories, excluding those in the Strategic Petroleum Reserve, decreased by 3.5 million bbl from the previous week. At 414.0 million bbl, inventories are 8% below the five-year average.

While production has recovered in the GOM, Dickson said, roughly a fifth of the region’s output still needs to come back to reach pre-Ida levels. Those levels, she added, were still below what producers brought to market prior to the pandemic.