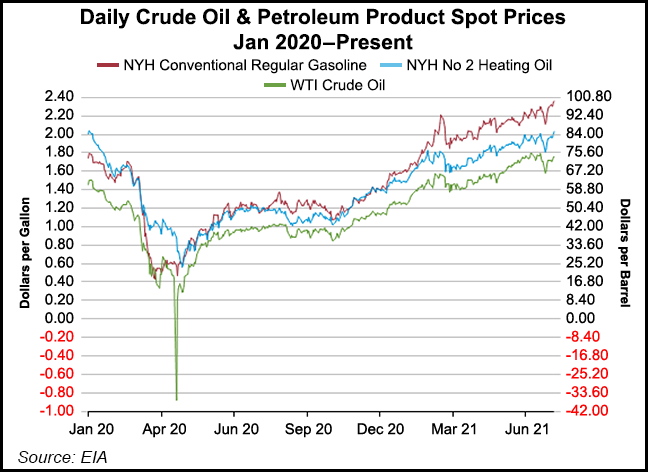 Meanwhile, U.S. commercial oil inventories in the week ended July 30 — excluding those in the Strategic Petroleum Reserve – increased by 3.6 million bbl from the previous week. The increase compared with a steep decline a week earlier – and in several prior weeks this summer. It also reflected that, while imports declined last week, exports fell even more, EIA’s Weekly Petroleum Status Report showed.

Still, at 439.2 million bbl, U.S. stocks are about 6% below the five-year average – near 2021 lows – and are widely projected to remain below historic norms until production activity picks up to balance supply with steadily mounting demand.

Rystad Energy estimated that the number of drilled but uncompleted horizontal wells (DUCs) in U.S. shale oil plays hovers around 4,510 — about 1,800 wells below the 2020 high. Rystad analysts say that, because new drilling requires ramp-up time, it may take another year for producers to close that gap.

Oil output averaged 11.2 million b/d last week, flat with the prior week. With domestic producers focused on cash flow and conservative spending, production held far lower than the early 2020 peak of 13.1 million b/d reached just prior to the coronavirus pandemic.

Demand, meanwhile, continues to mount as virus vaccines free up more people to travel, driving consumption of gasoline and other fuels derived from oil. Products supplied — EIA’s term for demand – rose 0.2% week/week. Demand was up substantially over the course of July when compared with a year earlier.

To be sure, the pandemic still looms large. The Delta variant of the coronavirus is spreading rapidly in large swaths of the United States, as well as other parts of the globe. If U.S. lockdowns were reinstated, they could of course impact domestic demand, as analysts at Raymond James & Associates Inc. noted this week.

So far, however, they said rapid economic growth continued through July in the United States as vaccination campaigns progressed and local governments resisted new restrictions on businesses or travel.

Globally, the Organization of the Petroleum Exporting Countries (OPEC) and its allies, aka OPEC-plus, also are gearing up for ongoing demand increases. While OPEC-plus officials said they are monitoring spread of the virus closely, they pumped more than 2 million b/d back into the global market between May and July. That was on top of production increases earlier in the year.