After climbing for two consecutive weeks, U.S. petroleum demand declined during the last week of May, the U.S. Energy Information Administration (EIA) said Wednesday. Still, refinery utilization reached a high for the year to date, and analysts anticipate demand to prove strong this summer. 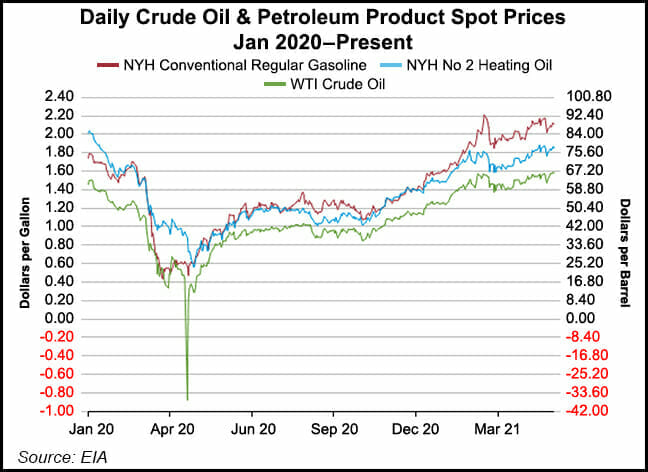 EIA said in its Weekly Petroleum Status Report (WPSR) overall petroleum demand for the period ended May 28 fell 4% week/week, as consumption of motor gasoline and distillate fuel oil tapered off from recent highs. Total demand had increased 3.5% the prior week and 10% a week earlier.

Despite the recent setback, refineries are gearing up for strong summer demand. Utilization hit 88.7% of capacity in the most recent EIA reporting period, the highest since February 2020, prior to the coronavirus pandemic.

“We see signs of higher consumption forthcoming,” analysts at ClearView Energy Partners LLC said. Crude oil inputs to refineries increased 400,000 b/d for the last week of May, “implying a tighter production versus consumption balance,” they said.

In addition to the refinery utilization, the analysts noted that, over the past four weeks, gasoline consumption was up substantially from year-earlier levels and exceeded 2019 levels as well.

This comes amid successful coronavirus vaccination programs and despite rising prices. U.S. retail gasoline prices averaged $3.12/gallon in the final week of May, the ClearView team said, the highest level since October 2014.

Domestic stockpiles decreased. U.S. commercial crude inventories, excluding those in the Strategic Petroleum Reserve, declined by 5.1 million bbl from the previous week, EIA said. At 479.3 million bbl, stocks were about 3% below the five-year average. The lower level reflected recovering demand over the spring months and lighter production.

“The summer oil demand surge is already showing its colors” in the United States and Europe, “where road fuel use is expected to increase even more as the population is trying to make the best out of the season after a year of restrictions,” said Rystad Energy analyst Louise Dickson.

Based on expectations for mounting demand, the Organization of the Petroleum Exporting Countries and its oil-producing allies, aka OPEC-plus, announced Wednesday they would stick with a plan to increase production through July.

The cartel’s plan calls for adding more than 2 million b/d into the market between May and the end of July. The group expects global oil demand to increase by about 6 million b/d in the second half of this year.

If that bears out and U.S. producers continue to keep a lid on output, global oil inventories could fall below the pre-pandemic, five-year average in 2021.

Domestic production “has basically flat lined” in a range from 10.8 million b/d to 11.1 million b/d during the pandemic, said Mizuho Securities USA LLC’s Robert Yawger, director of energy futures. U.S. output had reached a record high of 13.1 million b/d in March 2020, just prior to widespread virus outbreaks in the United States.

However, he said, with crude prices trading around $70/bbl in recent weeks, it may be “just a matter of time before oil producers…step on the accelerator and start pumping.

“By any measure, producers have done a fantastic job of production discipline, and have worked hard at returning profits to equity holders,” Yawger said. “That said and done, nobody could blame them for pumping a few extra barrels to top off the bottom line.”