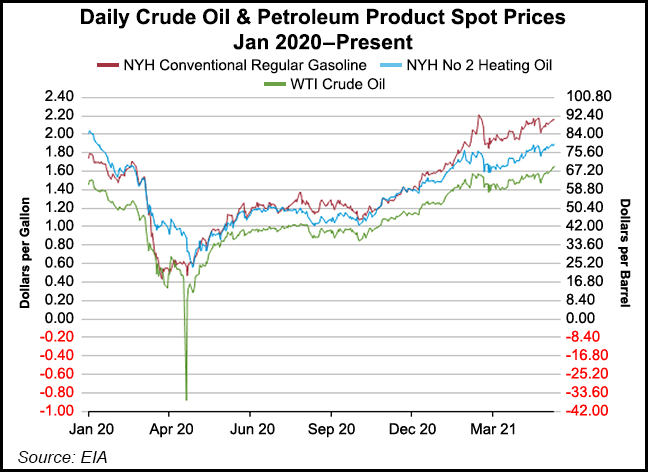 Refinery utilization, however, reached a 2021 high, the agency said in its Weekly Petroleum Status Report (WPSR). Refineries operated at 91.3% of their capacity and inputs averaged 15.9 million b/d during the week ended June 4, up 327,000 b/d from the previous week.

The refinery activity implies “a tighter production versus consumption balance,” analysts at ClearView Energy Partners LLC said. Refinery runs last week were at the highest level since prior to the onset of the pandemic in early 2020.

U.S. commercial crude inventories, excluding those in the Strategic Petroleum Reserve, decreased by 5.2 million bbl from the previous week. At 474.0 million bbl, inventories were 4% below the five year-average, according to EIA.

Total petroleum demand last week decreased 7% week/week after falling 4% in the final week of May. Demand for gasoline, jet fuel and distillate fuel oils all tapered off after steady increases earlier in the spring.

EIA said demand, however, is well ahead of where it was a year earlier, and analysts expect a strong summer as more people travel.

Demand over the last four-week period averaged 19.0 million b/d, up by 17% from the same period in 2020. In the same span, motor gasoline consumption increased 23%, distillate fuel demand rose 22% and jet fuel consumption surged 95%. Such demand is rebounding alongside successful coronavirus vaccine campaigns, a strengthening U.S. economy and mounting travel activity.

Benchmark crude prices have hovered near $70/bbl in recent weeks on demand optimism, up more than 40% this year.

Higher prices “are a reflection of the improved oil demand sentiment, and along with it, the expectation that crude and products inventories will significantly be reduced in the second half of 2021 as a post-pandemic new normal of oil consumption sets in,” said Rystad Energy analyst Louise Dickson.

“If oil prices continue their ascent, they will eventually trigger a stronger production response,” Dickson added.

U.S. producers have focused more on cash flow than production volumes this year. Still, output rose last week. Crude production for the week averaged 11.0 million b/d, up 200,000 b/d from the prior week.

What’s more, projecting strong demand this summer and through the fall, the Organization of the Petroleum Exporting Countries and its oil-producing allies, aka OPEC-plus, are currently executing on a three-month plan to increase production through July.

The cartel is adding more than 2 million b/d into the market between May and the end of July. The group expects global oil demand to increase by about 6 million b/d in the second half of this year.

Additionally, negotiations are underway this week between Iran and Western nations to reinstate a deal that would limit Iran’s ability to develop nuclear weapons in exchange for eased economic sanctions. If sanctions were lifted, Iran could quickly ramp up exports by more than 1 million b/d, analysts at Mizuho Securities USA LLC noted.

The National Iranian Oil Co. said Iran plans to restore “the bulk of its crude oil production within one month of the easing of U.S sanctions — if world powers manage to broker a revival of the 2015 nuclear deal,” said Mizuho Securities’ Robert Yawger, director of energy futures.