Consumption of petroleum products in the United States fell to 13.8 million b/d in the week ending April 10, according to the Energy Information Administration (EIA), the lowest level since at least the early 1990s, when the agency began publishing such data. 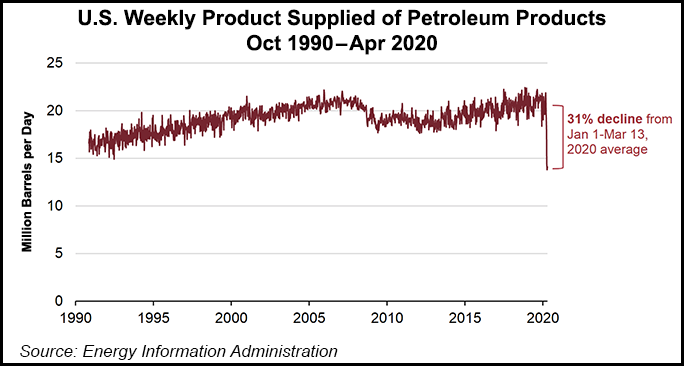 U.S. petroleum consumption rebounded slightly in the week ending April 17 to 14.1 million b/d. Even that amount was 31% lower than the average had been through mid-March, when travel restrictions and other Covid-19 mitigation efforts began to go into effect, EIA said.

Total U.S. petroleum product supplied fell by 3.4 million b/d in the week ending April 3, according to the agency’s Weekly Petroleum Status Report, which was issued Wednesday. However, there is some hint that the market may have found bottom.

“Changes in the weeks since then (weeks ending April 10 and April 17) have been more muted, suggesting that consumption is stabilizing,” EIA said.

“This decrease in motor gasoline product supplied accounts for 54% of the total change in product supplied. U.S. consumption of jet fuel experienced the largest drop in relative terms, declining 62% from a pre-shutdown average of 1.6 million b/d to just 612,000 b/d on April 17.”

The decline in distillate fuel oil consumption has been less severe than the changes in motor gasoline and jet fuel, declining 20% to 3.1 million b/d by the week ending April 17 from March 13, according to the report.

Analysts at Rystad Energy expect global oil demand will reach 89.23 million b/d this year, significantly lower than the 100.5 million b/d estimated prior to the pandemic and from 2019’s 99.5 million b/d.

“As global travel restrictions will largely stay in place in May 2020, gasoline demand will remain significantly depressed. Everyone along the supply chain is getting hammered right now, but refiners and traders exposed to gasoline are suffering the most,” Rystad analysts said Thursday.

The decline in petroleum use comes side by side with a historic slump in oil drilling, which in turn is likely to result in the largest monthly decline in completions activity ever recorded in the United States, according to Rystad.