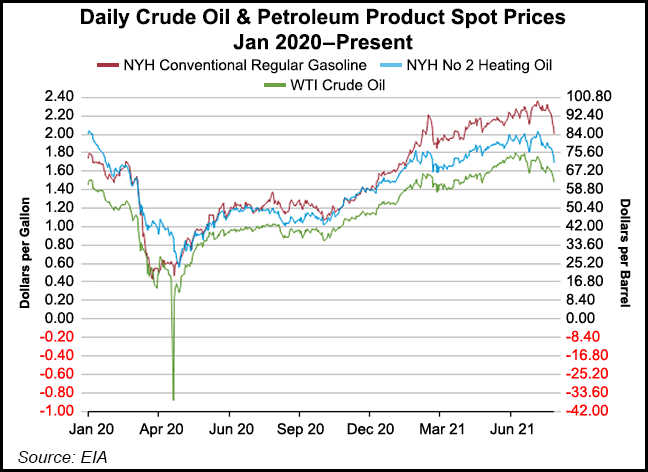 The fast-spreading Delta variant of the coronavirus presents increasing risk to Americans’ mobility – risk that could once again diminish demand for travel fuels derived from oil, said Mizuho Securities USA LLC’s Robert Yawger, director of energy futures. To date, however, crude consumption is steady and well above year-earlier levels.

Overall demand for the week ended Aug. 20 rose 2% week/week, EIA’s Weekly Petroleum Status Report showed, boosted by motor gasoline purchases. That followed a 10% increase the previous week. While uneven from one weekly period to the next, the prevailing trend throughout the summer has been to the upside, with consumption of jet and distillate fuels also jumping alongside growing U.S. and global economies.

Production, meanwhile, has held in a narrow range between roughly 11 million b/d and 11.5 million b/d this year. For the Aug. 20 week, output was flat from the prior period at 11.4 million b/d. Production remained 1.7 million b/d below the 2020 peak reached last March before the pandemic gripped the United States.

With demand holding strong, output even and imports down, U.S. commercial oil inventories last week — excluding those in the Strategic Petroleum Reserve — decreased by 3.0 million bbl from the previous week. At 432.6 million bbl, inventories are 6% below the five-year average.

A coronavirus resurgence, however, threatens to curb momentum.

As of Thursday, the U.S. seven-day moving average of daily new cases — 133,056 – was 14.0% higher than a week earlier, according to the Centers for Disease Control and Prevention. The latest average was 94% above the peak in July, when cases were already on the rise.

Cases have also ballooned in China and other parts of Asia as well as swaths of Europe.

Yawger said the data feed caution: “What happens when everybody is forced indoors during winter?  New variant?  When will two doses wear off?” The virus, he said, looms as a potential “demand killer.”

Against that backdrop, EIA said in its August Short-Term Energy Outlook (STEO) that it lowered its total global petroleum production average outlook to 98.9 million b/d for the second half of 2021. That’s down from a forecast of 99.4 million b/d in its July STEO. The agency said major U.S. producers, already holding the line on output, are likely to maintain that policy through 2021 because of pandemic uncertainty.

Separately, the International Energy Agency (IEA) said this month it expects global oil consumption to rise by 5.3 million b/d this year over 2020 levels and average 96.2 million b/d. The 2021 forecast, however, was down from IEA’s July estimate of 5.4 million b/d. The Paris-based agency cited mounting virus cases.

The Organization of the Petroleum Exporting Countries (OPEC) maintained its forecast demand level in a report this month. It said oil demand would rise by 5.95 million b/d this year, or nearly 7%. Still, cartel researchers cautioned revisions to the downside were possible.

“The path of the Covid-19 pandemic will be the overarching factor impacting the near-term pace of the recovery,” with the “potential emergence of new variants and/or mutations posing a particular risk,” OPEC analysts said.

In a report this week, RBN Energy LLC warned that the festering pandemic could “wreck forecasts of demand.” Analyst Bob Tippee said most oil market forecasts have not fully accounted for bursts in cases this summer. The virus in 2020 forced travel limits and business restrictions “that clobbered economies — and oil demand — around the globe.”

The specter of a repeat is weighing on producers’ minds and could soon impact demand.

If recent virus trends worsen, Tippee said forecasters “will have to moderate their outlooks for economic growth and recalibrate demand expectations accordingly.”