A bump in oil drilling raised the domestic rig count five units to 266 for the week ending Friday (Oct. 2), according to Baker Hughes Co. (BKR), marking the third straight weekly net increase in activity for a beleaguered U.S. exploration and production industry. 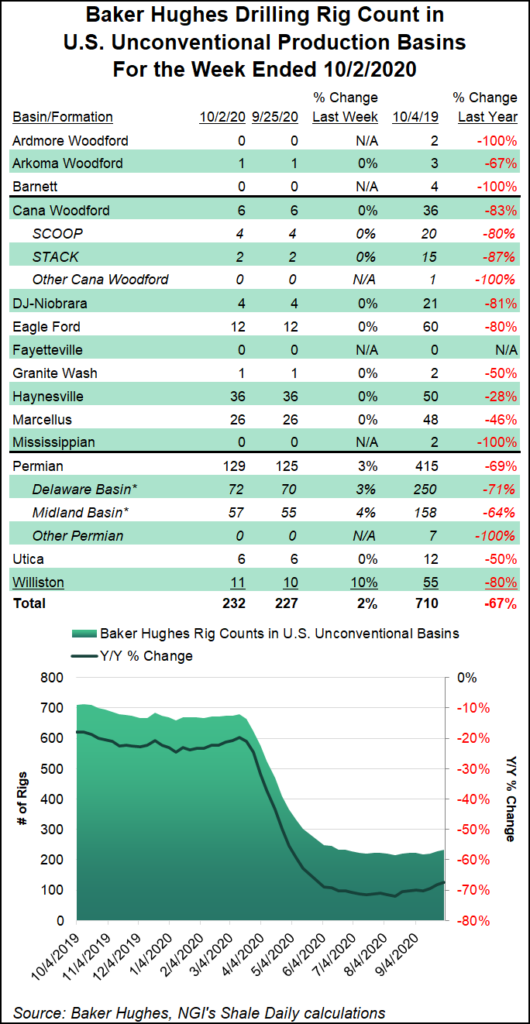 A six-rig increase in oil rigs offset a one-rig decline in natural gas-directed drilling for the week. That left the overall U.S. count sitting 589 rigs behind the 855 units active at the same time a year earlier.

All of the gains occurred on land, with the Gulf of Mexico finishing the week unchanged at 14 rigs. Five horizontal rigs returned to action during the week, while the total number of directional and vertical units remained unchanged.

Canada added four rigs overall for the week, all of them oil-directed. The 75 active Canadian rigs for the week compares with 144 active in the year-ago period.

The combined North American rig count stood at 341 as of Friday, down from 999 at the same time last year.

Among major plays, the increase in oil drilling for the week was concentrated in the Permian Basin, which picked up four units to end with 129, versus 415 a year ago. The Williston Basin added one rig to up its total to 11, versus 55 a year ago.

Among states, New Mexico saw a net gain of three rigs, while Louisiana and North Dakota each added one overall, according to BKR data.

Chief Investment Officer Dan Pickering, who currently serves as the portfolio manager of the PEP Energy Equity Opportunities Fund, said there is “too much oil, too many rigs, too much of essentially everything.” The longtime investor, researcher and analyst made the comments at Hart Energy’s DUG Permian Basin-Eagle Ford conference, held virtually this year.

In the Permian specifically, the United States has “an embarrassment of riches,” or “certainly a dramatic production growth. We’ve got this system that churned out a ton of production and essentially, we oversupplied the world,” Pickering said.

Oasis CEO Thomas B. Nusz said it was “historically low global energy demand and commodity prices” that led management to “take decisive action to strengthen our liquidity and overcome the headwinds now challenging both our company and industry.”