Largely a matter of procedure at this point, the United States is officially out of the United Nations (UN) Paris Agreement, the landmark international accord drafted in 2015 in an attempt to mitigate rising global temperatures. 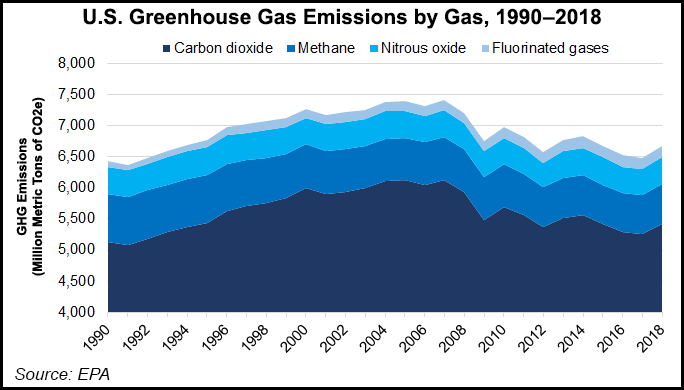 While the Trump Administration announced its plans to withdraw from the Paris Agreement in 2017, the agreement requires that participating parties wait three years from ratification, plus another year after providing written notice, before officially backing out.

To date, 189 parties have ratified the Paris Agreement, according to the UN. The agreement officially went into effect on Nov. 4, 2016. The Trump Administration served up official notice of its intention to withdraw a year ago.

President Trump’s antipathy toward the Paris Agreement, entered into by the Obama Administration, has been well-documented.

In a 2017 speech, Trump criticized the accord — which asks participating countries to commit to “nationally determined contributions” to fight climate change — as an “example of Washington entering into an agreement that disadvantages the United States to the exclusive benefit of other countries.”

What happens from here likely hinges on the outcome of the U.S. presidential election, a contest still awaiting resolution as of midday Wednesday, when votes were still being counted and both candidates were still charting credible paths to victory in the Electoral College.

Despite the U.S. withdrawal from international efforts to fight climate change, environmental groups were still holding out hope for progress on the issue Wednesday.

“Whatever the final result of the election, don’t count the United States out,” 350.org Executive Director May Boeve said. “Despite the U.S. federal government officially leaving the Paris Agreement, there are millions of Americans who reject this regression, are committed to climate justice, and are demanding that the U.S. as a whole — including cities, states and banks — uphold the goals of Paris and go beyond.”

The lack of a federal response to climate change, of course, does not preclude regional efforts to reduce carbon emissions. To that effect, the Federal Energy Regulatory Commission recently published a policy statement signaling its openness to carbon pricing mechanisms in electricity markets unders its purview.

Paris or no, oil and gas companies, including BP plc, Equinor SA, Total SE and others, have also publicly pressed forward in pursuit of an energy transitionThat said, Trump, who has worked to roll back environmental regulations, has enjoyed the energy sector’s financial backing.