To some observers, ExxonMobil Corp. has been a plodder in North America’s onshore, but as low commodity prices shut the door to some operators, the supermajor is ready to roar, with plans to double output from three key U.S. plays through 2017. 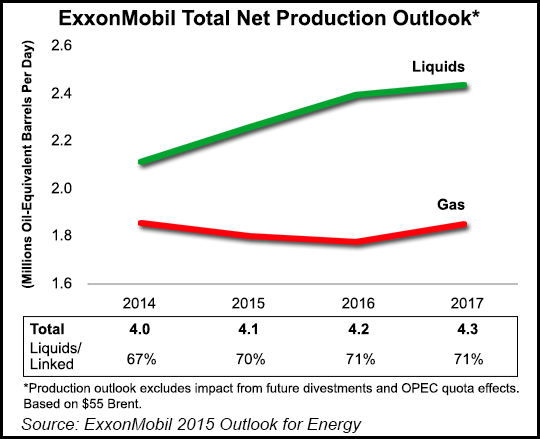 There’s money to be made in the Ardmore, Permian and Williston basins, even at an oil price of $55/bbl, Tillerson said during the company’s annual analyst day conference in New York City. He laid out a somewhat cautious global strategy over the next three years but made clear that domestic onshore plays would provide a reliable cash engine to fuel other projects worldwide.

Since it has taken the time to study drilling techniques, ExxonMobil’s clout as the biggest natural gas producer and one of the biggest domestic oil producers is going to pay big dividends, Tillerson said. Even as the price of crude has plunged, ExxonMobil has begun generating “attractive returns…”

As competitors scrambled for rigs and crews on higher oil prices, ExxonMobil spent the last few years “in an appraisal mode,” the CEO said. “That’s why we didn’t ramp things up and get crazy just because the price was high. We want to know, how do you get the most out of these rocks and these resources in the most cost efficient way? We take a lot of time to understand it, and we’ll operate and appraise it at a fairly low level.

“And then when we think we’ve got it, then we gradually bring things up so that the organization can plow everything into the next well, the next foot of drilling…Now I think it might surprise a lot of people as to how attractive some of these things are in this environment.”

“If you look at since back to 2010 when XTO became part of our portfolio, we had about 12 rigs drilling in the kind of ‘big three’ liquids plays that we talk about today, the Bakken, the Permian and Woodford in the Ardmore and Marietta,” Williams said. “Today, we’ve got 45, and that’s been a real gradual step up. We have plenty of time to incorporate the learnings as we go on…”

Today ExxonMobil is putting more stages into its fractures, and costs have fallen at some sites by as much as 25%. “Of course, we run economics on every single well that we drill,” Williams said. “We’re not going to go take any investment decisions on anything that doesn’t make sense, and certainly at today’s prices.”

No matter the commodity price, lower drilling costs can be a bigger driver, Williams said. If a well doesn’t make sense at $100/bbl, ExxonMobil won’t pursue it. That philosophy won’t change. “If the price drops significantly and costs don’t drop significantly, going forward we’ll adjust,” said Williams. “We’re in no hurry to continue this journey, but the size is big. It’s very material. We could continue drilling the plays…at today’s levels for another 20 years, but that’s our inventory.

“In natural gas, our inventory is four to five times that amount.”

Every item in ExxonMobil’s upstream portfolio is “stacked,” Tillerson said. “These wells…have to compete with the next best opportunity on a return base…” The company is “looking at the return on investment and…the impact on earnings and cash and all the other things that are important. But it kind of starts with the returns…” The U.S. onshore leaseholds, the oily ones in any case, “clearly are attractive to us or we wouldn’t be doing them.”

U.S. wells comprised around 22% of crude output in 2014 and was about 15% higher than in 2008. Other producers might boast of bigger returns over that period, but slow and steady wins the race. A little muscle never hurts, either.

This year, capital expenditures (capex) is set 12% lower than in 2014 at $34 billion, with spending in 2016 and 2017 to remain relatively flat. The lower capex outlook also includes “an appropriate reexamination” of several projects in the queue for final investment decisions (FID) “to improve the specific terms and conditions as well as optimize the development plans in this environment.”

“We continue to focus on higher-margin liquids growth mainly through development of our Bakken, Permian and Ardmore/Marietta core plays,” Tillerson said. “Liquids-rich drilling represented more than 85% of our operated rigs in 2014,” and planned production growth is set to be more than 150,000 b/d 2017. “Our U.S. onshore portfolio is resilient. The high quality and scale of our resources in these core plays deliver attractive returns through the cycle, including in the current price environment. We have the financial strength to develop these plays through the cycle, which provides the opportunity to capture significant cost savings in this changing market.”

How to make money in a down market? Integration across the oil and gas chain is a primary factor. A relentless pursuit of better technology and technique provides a big boost, with established vendor and contractor relationships providing the sauce.

“Technology in the unconventional space is a competitive advantage for XTO,” Tillerson said. “Simply stated, the incremental barrel that remains online is the most profitable…”

Gas volumes are seen falling on average by around 2% through 2016, “really reflective of the reduced North American gas,” Tillerson said. “We expect gas volumes to increase 4% in 2017 primarily driven by the ongoing ramp up at Gorgon,” a gas export project in Australia.

Anyone looking for signs that gas production in North America might improve, ExxonMobil is looking for a reason, the CEO said.

“While this outlook reflects our current views on market demand for North America gas, as I’ve noted in the past we have a very deep, ready-to-drill inventory well locations and the ability to quickly respond to opportunities to increase production as the market may dictate. Overall higher margin liquids and liquids-linked gas volumes are projected to reach 71% of our total mix by 2016.”