U.S. land drillers have increased “only modestly” the number of rigs used from a year ago, but more efficient designs are resulting in more production, a trend likely to continue, a Standard & Poor’s Ratings Services (S&P) analyst is forecasting. 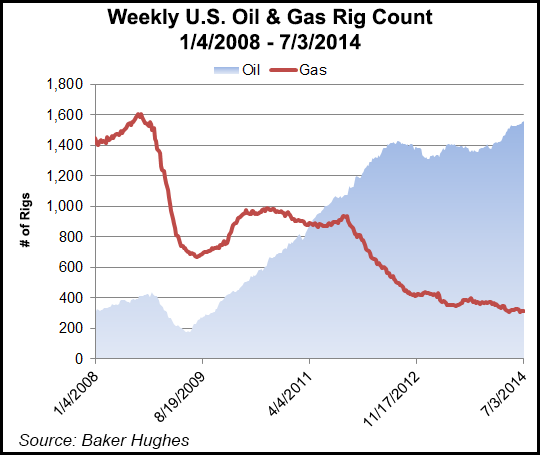 The more efficient designs have required fewer rigs to produce as much as before, Bromberg noted.

“Efficiency gains are part of the reason that natural gas production continues to rise despite the drop in the natural gas rig count,” he said. “Gas rigs represented 17.2% of total rigs as of June 6, 2014, compared with about 20% a year ago and nearly 50% just three years ago.”

S&P’s outlook remains stable for most of the rated land-based drillers.

“Given our favorable outlook for crude oil prices — $90/bbl for West Texas Intermediate crude in 2015 and $85/bbl thereafter — we think that oil drilling should support a modest increase in the overall rig count. In the meantime, we believe that onshore drillers will continue to invest aggressively in new, more technologically advanced rigs.

“We believe that drillers will experience healthy demand (and day rates)” from exploration and production operators that require “the most sophisticated rigs (for instance, rigs that can ‘walk’ from well to well and those with top drives of at least 1,500 hp.”

For those operators that already have more “sophisticated” rigs in their fleets — or the financial flexibility to build rigs — the higher day rates “could mean improved profitability,” said Bromberg. “We think that higher-rated onshore drilling issuers such as Nabors Industries Inc., Precision Drilling Corp. and Trinidad Drilling are most likely to benefit from this trend.”

Nabors already had the sixth-largest completion and production arm in the United States before the unit last month bought C&J Energy Services Inc. in a $2.86 billion deal (see Shale Daily, June 26). The merger is expected to create one of the largest hydraulic fracturing businesses in North America. C&J owns the 13th biggest fleet of trucks used in U.S. completion activities.

At the end of March Nabors had 286 rigs running in the Lower 48 states, including 172 high-tech alternating current (AC) rigs and 88 silicon-controlled rectifiers (SCR) with walking systems. Thirteen of the domestic onshore rigs had moving systems. In addition, 26 mechanical rigs remained in operation in the U.S. onshore.

Earlier this year analysts with Raymond James & Associates Inc. predicted the domestic rig forecast would be about 2.5% higher than it was in 2013, with horizontal drilling up by 11% (see Shale Daily, Feb. 18).