Driven by declines in the offshore Gulf of Mexico (GOM), the United States dropped four rigs during the week ended Aug. 4, according to data released by Baker Hughes Inc. (BHI). 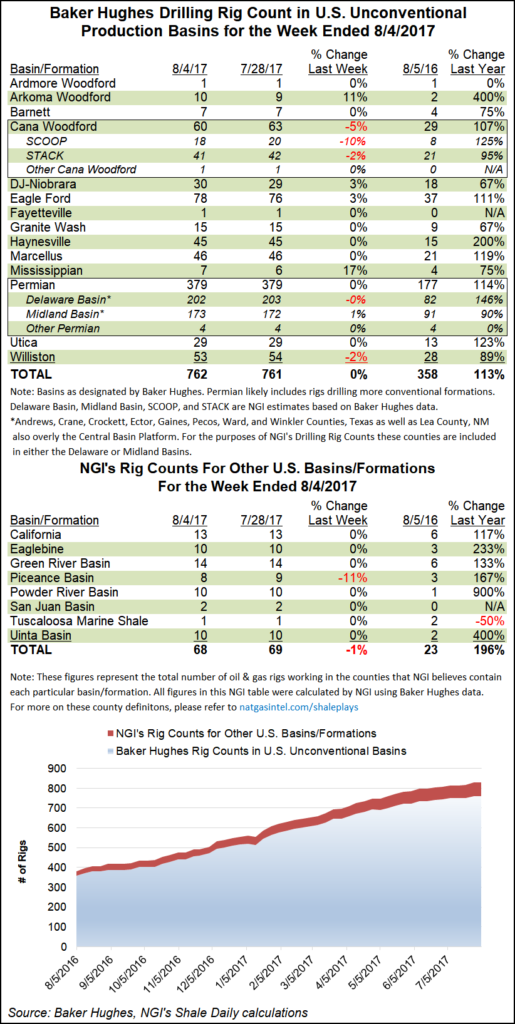 Three U.S. land rigs returned for the week, but that wasn’t enough to offset the seven rigs that packed up in the GOM. There are now 16 GOM rigs running, down from 23 a week ago and off slightly from 17 rigs running a year ago, according to BHI.

In total, the United States dropped one oil-directed rig and three natural gas-directed rigs to finish at 954 for the week, versus 958 last week but well above 464 rigs running in the year-ago period.

Canada ended the week down three at 217 rigs, as five oil rigs were dropped and two natural gas-directed rigs returned.

The North American rig count finished at 1,171 for the week, down seven week/week but up year/year from 586 rigs.

Texas was the biggest gainer among states, adding four rigs for the week. However, the Permian Basin didn’t drive the gains, as the play that runs through West Texas and part of southeastern New Mexico remained flat for the week at 379 rigs.

Louisiana was the biggest loser among states, dropping five rigs to end the week at 67. Home to the Haynesville Shale, which has tripled its rig count from 15 to 45 over the past year, Louisiana still sits well above its year-ago tally of 42 rigs.

The Cana Woodford formation in Oklahoma gave up three rigs for the week to end at 60, while the Bakken Shale dropped one rig to end at 53.

The biggest overall change was in the GOM, which saw its rig count fall 30% in a week’s time, according to BHI data. During a 2Q2017 conference call Thursday, Hornbeck Offshore Services CEO Todd Hornbeck said GOM drilling activity had been “anemic” and that he doesn’t see things improving dramatically over the next two years.

“We’re seeing a bit of seasonal improvement in our utilization, which we expected, but the fundamentals on the demand side of the equation are about the same as they have been and our second quarter results reflect that reality,” Hornbeck said. “There are about 20 deepwater drilling units working in the Gulf of Mexico on average, which is anemic. The number of jack-ups working today has increased to eight units as opposed to four units last quarter. While this is interesting and positive, it is not impactful.

“We see little on the horizon to suggest that these levels will change much in the deepwater Gulf of Mexico this year or next year. We hope we’re wrong, and we’ll be the first to admit error if we are. But right now, other than signs of a possible stabilization in the price of oil, we just don’t see a catalyst for demand growth.”