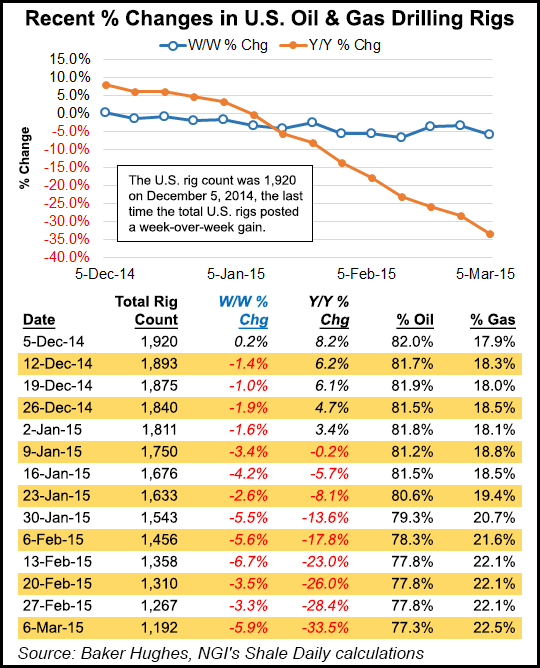 Canada drillers dropped 30 land rigs for the week. A year ago Canada had 587 rigs working, but as of Friday there were 300, equally split between oil and gas.

Most of the rigs dropped in the last week were horizontals, off 51 to 895 from 1,202 a year ago. The vertical rig count fell by 17 to 177, versus 392 last year. Seven directional rigs also were dropped and the count is down by 78 year/year.

By far, Texas took the brunt of the lost rigs in the latest week, which has been the case in the country’s busiest operating area. The state lost 32 rigs to bring the total to 538, versus 864 rigs working a year ago.

Permian Basin operators dropped 22 rigs to bring the total for the week to 333 versus 506 last year. The second biggest loss was in the Eagle Ford Shale, where eight rigs were cut to 149 from 222 a year ago. Five rigs also were dropped in the Denver-Julesburg Basin, bringing its weekly total to 34 from 54 last year. Three rigs were cut in both the Williston Basin and Mississippian Lime formation.

Oklahoma’s count has fallen to 139 from 182 a year ago, while New Mexico lost seven rigs for the week, with 61 now in operation versus 81 last year. Pennsylvania’s rig count stood at 47, down seven for the week and off from 53 last year. Colorado dropped five rigs to bring its total to 39, versus 61 a year ago.