Producers and their oil service brethren, looking to nourish their balance sheets after wandering in a price wasteland for two years, are receiving manna for equity offerings from the unlikely source of the oil price debacle in late 2014, the Organization of the Petroleum Exporting Countries (OPEC). 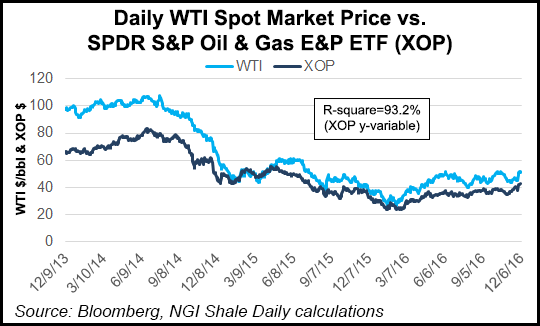 “Many E&P companies have been looking to shore up their balance sheet in recent quarters, particularly amid the commodity downturn,” said NGI‘s Patrick Rau, director of strategy and research. “A lot of producers loaded up on debt over the last decade, in order to gobble up acreage and to accelerate their production growth and the pace at which they prove up their reserves. “I think many producers would have loved to have issued some equity to pay down debt and lower their leverage ratios for quite some time, but they didn’t, simply because their stock prices were too low. The lower the stock price, the more shares a company has to issue to raise the same amount of capital, and therefore the more dilutive that would be to earnings.”

Stock prices for many U.S. producers “have recovered nicely” this year, “and many E&P names received another 20-30% boost after OPEC lowered its production target last week,” Rau said. “Some may be doing equity raises right now because they fear crude prices may drift lower, so they are taking advantage of the market while it is hot, so to speak, while others may be looking at this the same way that they hedge. They have a target debt-equity ratio, and when their stock price rises to a certain level, they sell some equity, much like they would layer in production hedges when commodity prices rise to a certain level.”

Coker Palmer Institutional (CPI) analysts in an energy macro note said Wednesday they were “a bit surprised at the flurry of energy equity offerings, which must have been ‘waiting in the wings’ for the OPEC news. This makes us wonder what would have happened if OPEC had ‘failed?’ In any case, OPEC got its act together (along with important non-OPEC players) and reduced production.”

The recent equity offerings could be different from the ones since the price downturn. Since the bear market began in late 2014, four types of equity offerings have been underway. “First we had the ‘quick deals,’ as some smart management teams realized they needed to prepare for a longer downturn (and they were right),” CPI analysts said. “Next were the ‘survival deals,’ where companies were forced to sell equity in order to survive or face possible restructuring and/or bankruptcy. Then came the ‘acquisition equity’ deals, as low commodity prices offered acquisition opportunities, often in the premium basins, to the strongest companies, enabling them to solidify their positions in the downturn.”

The next wave of offerings may lead to a “growth equity” environment, where proceeds accelerate production growth. While the best managed E&Ps may be able to accelerate without raising equity, others, like those adding leaseholds in the Permian Basin, could use a financial boost, CPI said.

Growth is exactly what Rockies player Bill Barrett (BBG) and Matador said they intend to do with the proceeds from their offerings. Permian-focused Matador priced an upsized private offering of $175 million for notes due in 2023, and it plans to use the net proceeds to fund its purchase of 4,600 net acres and production of 1,150 boe/d from wells in New Mexico’s Eddy and Lea counties, as well as to fund capital spending for midstream initiatives in the Delaware sub-basin. It also wants to add a fourth rig in the play.

Denver-based BBG also is looking to expand in the Denver-Julesburg (DJ) Basin with its 13.5 million common share offering, anticipating gross proceeds of $99.9 million; the net would be used for “development, deleveraging or future acquisitions.” At the end of September, BBG had $174 million of cash on the balance sheet and $274 million in available capacity under its $300 million credit facility, which represents total liquidity of $448 million, according to Wells Fargo Securities. With the issued stock, total liquidity would increase to around $560 million.

Antero, which primarily works in Appalachia, is offering $600 million in senior unsecured notes due in 2025, with plans to net proceeds for general corporate purposes. Chesapeake upsized a $750 million offering to $1 billion for notes maturing in 2025 in part to pay down debt. Permian-focused Parsley upsized its offer to $650 million from $600 million, also for notes also maturing in 2025. Ring, another Permian player, offered 6.525 million shares of its common stock at $11.50/share, with net proceeds of around $71 million that would be used in part to finance capital expenditures.

The OPEC agreement “arrived just in time for the 2017 E&P budgeting process,” said Evercore ISI analyst James C. West. “The next two months will feature a throng of formal E&P budget announcements, which we expect to detail considerable increases to budgets and work programs in North America.”

Higher oil prices may not be the panacea some E&Ps need, as they have taken advantage of the downtime to improve operations. The price bump may improve cash flow for operations, “particularly for heavily leveraged independents,” but it may not be “a long-term solution in competing with some cost-advantaged OPEC producers,” said Douglas-Westwood Ltd. consultant Andrew Meyers, who is based in Houston.