Across the Lower 48, the seven major oil and natural gas basins have seen a clear decline overall in production, but new-well output per rig — natural gas and oil — is strengthening, the Energy Information Administration said Monday. 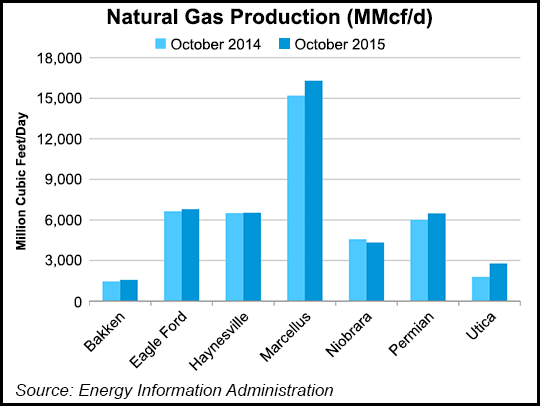 Production is declining in nearly every basin as operators drop rigs, according to the Drilling Productivity Report (DPR) for September. Only the Permian Basin is expected to produce more natural gas and more oil between September and October, the federal report said.

The monthly DPR uses recent data on the total number of drilling rigs in operation and estimates of drilling productivity/changes from existing wells to provide estimated changes for seven key regions: the Bakken, Eagle Ford, Haynesville, Marcellus, Niobrara, Permian and Utica. Together they accounted for 95% of domestic oil growth and all gas growth during 2011-2013. The DPR does not distinguish between oil-directed or gas-directed rigs because more than half of the completed wells produce oil and gas.

Together, the seven regions should see a 208 MMcf/d decline in gas output between September and October to 44,785 MMcf/d. Total oil output is set to decline by 80,000 b/d across the seven basins to 5.206 million b/d.

Only the Permian Basin, which extends across part of West Texas and southeastern New Mexico, is forecast to see oil and gas output gains, with gas up by 8 MMcf/d to 6,478 MMcf/d, and oil output rising 23,000 b/d to 2.02 million b/d.

The Haynesville, a gassy formation spreading across part of East Texas into Louisiana, is the only other formation set to see its gas production increase month/month, up by 39 MMcf/d to 6,523 MMcf/d, according to the DPR.

The biggest gas production losses from September to October are expected in the Eagle Ford, which is forecast to see output fall by 117 MMcf/d to 6,808 MMcf/d. The Marcellus should see an 82 MMcf/d loss month/month to 16,290 MMcf/d, while the Niobrara is forecast to see a decline of 50 MMcf/d to 4,321 MMcf/d. The Utica’s gas production is expected to fall by 4 MMcf/d to 2,790 MMcf/d, while Bakken output should decline by 2 MMcf/d to 1,575 MMcf/d.

New-well oil production/rig is seen rising by 1 b/d to 449 b/d between September and October, according to the DPR. Oil production still is seen growing in every region but the Haynesville, which is expected to be flat at 27 b/d.