Geopolitical events have helped rebalance global crude oil fundamentals, but the ability of U.S. onshore oil operators to ramp up quickly could again throw the market into oversupply, according to Morningstar. 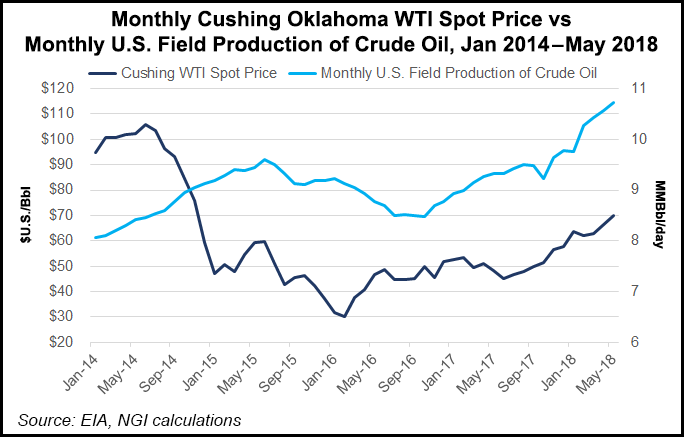 In a market outlook for the third quarter covering several industry sectors, equity analyst Joe Gemino and his team analyzed how voluntary curtailments by the Organization of the Petroleum Exporting Countries (OPEC) and its allies, as well as other geopolitical events, have created an opening for U.S. onshore oil producers to double down.

OPEC and its allies agreed to voluntarily reduce output, which helped realign global inventories. In addition, major oil producer Venezuela remains in crisis, and plans by President Trump To abandon the Iran nuclear accord likely will widen the oil supply/demand imbalance and accelerate the decline in inventories.

“However, we believe the market continues to underestimate the capacity of the shale industry to throw oil markets back into oversupply,” Gemino said of U.S. operators. “Crude prices have largely held above $65/bbl for West Texas Intermediate (WTI) in 2018, which provides attractive economics for many U.S. producers.”

Oil prices eventually have to be pared back to prevent “catastrophic growth” by U.S. shale and tight oil operators.

“What’s obvious by now is that current oil prices provide economics that are very attractive to the major U.S. shale producers,” Gemino and his team said. “This has created the conditions that will allow tight oil to grow rapidly and is a reality that even forthcoming cost inflation will not change.”

OPEC and its allies in June secured a compromise agreement that effectively will add about 600,000 b/d to the market, or around 0.5% of global supply. The Saudi-led cartel of 24 OPEC and non-OPEC members in its 174th meeting in Vienna agreed to adjust the production reductions and raise output by 1 million b/d; global output has been reduced by 1.2 million b/d since the start of 2017.

Amid supply disruptions around the globe, “the reckoning” for U.S. oil producers “may not happen as quickly as we previously thought,” said Gemino and his team. “Eventually, we expect pain for oil prices as growing U.S. production serves as the primary weight to tip oil markets back into oversupply.”

Morningstar’s midcycle forecast for WTI remains at $55/bbl because the oil bulls may not recognize the “vast potential for further productivity gains from U.S. producers and are unduly worried about prime shale acreage running out more quickly than it really will,” Gemino said.

The U.S. oil rig count has spiked above 650, above the medium level that might keep the market balanced in the long run, which sets up a predictable onshore output surge that could overwhelm the market beyond 2018.

The oil and gas industry appears not to have “recognized the danger,” said the Morningstar team. “Because of the long lag between adding rigs and seeing a production response, the impact of the most recent additions hasn’t been felt yet.”

To complicate matters, temporary equipment bottlenecks and labor shortages in the Lower 48 continue to slow completions and mask the growth potential. For example, only 70% of the Permian Basin wells drilled last year were completed, according to Morningstar.

When the equipment and labor shortages are resolved, the U.S. oil and gas industry may find itself “rapidly overheating unless producers start slowing down, and only a drop in oil prices can persuade them to do that.

“Nothing is ever certain in the world of oil, but a crude awakening for energy investors could very well be near at hand.”

Sustainably lower breakevens in North America’s onshore oilfields mean the era of low-cost oil is here to stay, according to Morningstar. Lower costs are driven in part by expectations for “minimal inflation” in proppant and pressure pumping costs.