U.S. oil supply growth has begun to moderate, but better-built wells could keep domestic supply in 2018 at close to 2014 levels, even with fewer rigs, Raymond James & Associates analysts estimated. 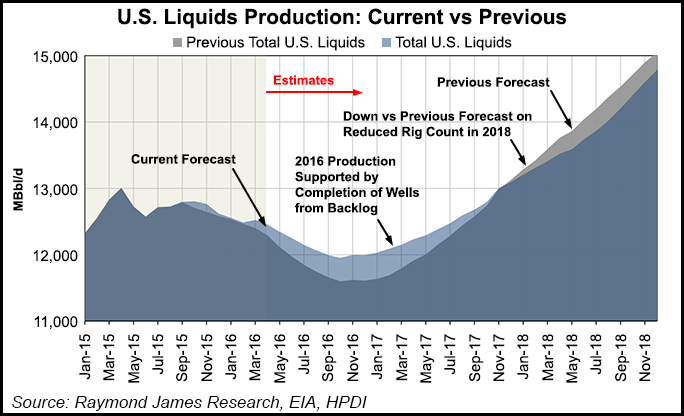 The firm in a note Monday reduced its 2017/2018 U.S. oil supply growth estimates because of lower activity but tempered the decline because onshore wells are producing more.

The updated supply model used a bottoms-up approach, in which U.S. onshore production was monitored and analyzed from each monthly batch of wells brought online since 2011. The model incorporated drilling trends and changes in well productivity to better judge future output.

“We have tweaked our assumptions on both U.S. production efficiency gains and completion rates, resulting in a sooner and higher bottom in 2016 U.S. liquids production (12 million b/d versus 11.6 million b/d),” said J. Marshall Adkins and Praveen Narra.

The “modestly more robust” short-term supply outlook in the last half of this year will result from high-grading by producers to the sweet spots, learning curve gains and completing more drilled but uncompleted (DUC) wells.

The Raymond James team last month said it expected the domestic rig count to decline by about 10% in 2017 and 2018 (see Shale Daily, May 31). The latest review assessed how increased well productivity, changing drilling efficiencies and DUCs has impacted the onshore.

Based on the tweaked assumptions, Adkins and Narra are forecasting U.S. liquids output, including natural gas liquids, to begin to ramp up about two months sooner and to bottom at a higher rate — 12 million b/d versus a previous assumption of 11.6 million b/d. In 2017, average U.S. liquids growth is forecast to be 30,000 b/d lower at 258,000 b/d.

Still, 2018 production growth should approach 2014 levels even with 600 fewer rigs. Efficiency has become the name of the game.

Raymond James’ four major modeled oil basins — Bakken and Eagle Ford shales, Niobrara formation and Permian Basin — have achieved 30%-plus yearly increases in initial production (IP) rates in each of the past four years. IP rates should continue to increase — but at a more modest pace in 2017 and 2018 relative to the prior five years.

“While well productivities have been steadily surging higher, drilling efficiency gains are somewhat more complicated and volatile,” Adkins said. Drilling efficiencies are much improved, but the overall trend of wells drilled per rig/month has fallen as producers have shifted to longer laterals and horizontals from verticals.

Also, “the ebb and flow of service company shortages and surpluses,” along with a backlog of DUCs, have lifted volatility from timed well completions per active rigs.

Most U.S. operators in the $100/bbl world often contracted rigs on a multi-year basis. When prices crashed, operators slowed their expensive completions but kept drilling on the contracted rigs to conserve cash, which resulted in a backlog of DUCs.

“In light of our bullish forecast over the next few quarters, we believe that DUC completions will resume in force in the second half of 2016, thus keeping well completions rates higher than the historical trend-line,” said Adkins and Narra. By early 2017, the DUC inventory should decline sharply, as “labor low-grading” and equipment attrition wreak havoc on completion rates.

“Put simply, well drilling and completion efficiencies should fall sharply as the industry tries to re-staff and regroup,” Adkins said. “Combined with the likelihood of drilling more complicated prospects under a higher price environment, we see drilling efficiencies declining in 2017 and 2018.”