The domestic natural gas and oil industry has slowed its roll in the past few months as commodity prices remain volatile, but overall, employment grew stronger in 2019, climbing to 895,629 employed, or up 8,554 year/year, according to an annual overview by one of the largest oil and gas trade groups in the nation. 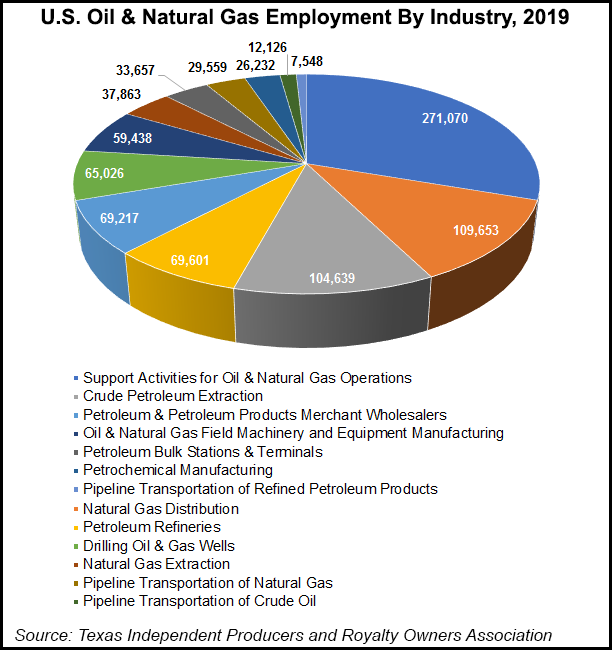 The Texas Independent Producers & Royalty Owners Association (TIPRO) in its fifth State of the Energy report detailed national and state trends in employment, wages and other key economic factors for 2019. The series was developed to quantify and track the economic impact of domestic production, with an emphasis on Texas, which is home to most U.S. gas and oil activity.

As focus shifts by producers from volume growth to optimizing returns in U.S. onshore plays, the 1 million b/d growth experienced in 2019 and the 1.9 million b/d production increase achieved in 2018 “will certainly calm, but not cease,” TIPRO said.

“A reduction in available capital led to a slowdown in industry activity and a decline in employment during the second half of the year in 2019, with further cuts expected in the first quarter of 2020,” said TIPRO Chairman Eugene Garcia, who is president of Hurd Enterprises LLC.

“Despite numerous challenges that faced domestic producers in 2019, the Texas oil and gas industry has remained a cornerstone of the economy providing high-paying career opportunities, as well as significant taxes and royalty payments made to state, local and federal government entities.”

Across the country, well paying jobs can be found in the energy industry.

“In addition to employing hundreds of thousands of Texans, the oil and gas sector has played a crucial role in making the United States energy independent,” Texas Gov. Greg Abbott said. “The state of Texas will continue to create an environment that allows independent producers to innovate, thrive and create a stronger future for our great state.”

Energy jobs also paid well in the Lone Star State, with an average annual wage of $132,104, or 130% higher than average private sector wages in the state.

Texas also had the highest gas and oil payroll in the country in 2019 at $48 billion, with California coming in at a distant second ($9.2 billion), followed by Oklahoma ($6.9 billion).

From 2010 through 2019, Texas taxes and royalty payments paid by the industry exceeded $116 billion, including a record $16.3 billion contributed in 2019, TIPRO noted. Also last year the Texas gas and oil industry purchased U.S. goods and services totaling $202 billion, 8% of which were from Texas businesses.

TIPRO also noted recent policy developments in the new report, which included finalizing the United States-Mexico-Canada Agreement, signing the first phase of the China trade deal and the revamped Waters of the United States rule, all benefiting U.S. producers.

“Key priorities for TIPRO at the state level during the next legislative cycle will include a long-term solution to funding transportation investment in energy producing areas, workforce development and a balanced approach to critical infrastructure needs that recognizes the dominance of the mineral estate, existing laws and regulations, and private property rights.”