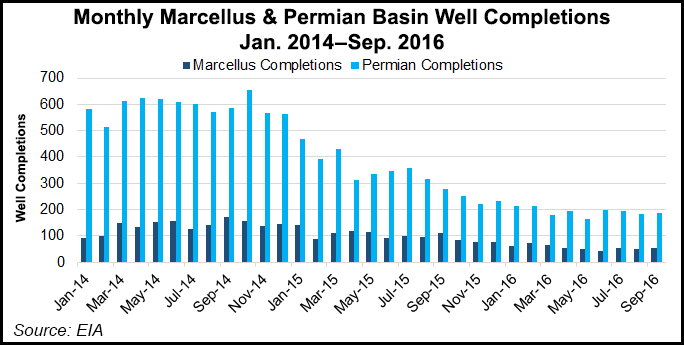 Dunlap spent about an hour discussing third quarter results during a conference call, focusing mostly on U.S. land, where more than half of Superior’s revenue is generated. Business is so-so to slightly better.

What happens through the rest of the year depends on how customers “approach completions activity, which was really very slow in the third quarter,” Dunlap said. “A lot of operators have still not gone to 24/7 operation; operators have idle days in between wells.

“Our belief is that with oil prices at $50/bbl or better that we begin to see that pace of completions increase, but a lot of our earnings production is going to be based on that pace…

“We think that, in total, our fracturing and well services business still have a lot of room to add revenue and margin just based on a higher pace of completions. I think given oil prices about $50, we’re confident we get to that point in the first quarter. I think the fourth quarter is going to depend just on how pace changes during the course of the quarter.”

Exploration and production (E&P) company customer “spending and attitude remained cautious during July and August before becoming more positive during September, in conjunction with a more positive oil price sentiment.”

As customer sentiment appeared to change, Superior began focusing on market recovery. The company now has begun to deploy some of its preserved cash and has begun hiring and training crews, “as we see what appears to be the early signs of a North American recovery.”

However, the recovery won’t be across all U.S. basins nor to every business segment. In fact, Superior shut down its fracturing operations in the Northeast during 3Q2016 and redeployed the horsepower to the Permian Basin.

“In hydraulic fracturing, we chose to stack roughly 50% of our total assets during the downturn, preserving equipment life and minimizing expense until we believed that the market was near turning point,” Dunlap said. “We chose not to focus on market share, but instead continued to concentrate only on a select group of clients. Now, those clients are in the early stages of a demand increase and we are responding.”

“Although our working horsepower is expanding, our fracturing customer base is not,” the CEO said. “We are responding to increased demand from existing customers who we know best.” But as of this week, E&Ps still are not working all fleets at full utilization.

“Some are not working 24/7, while others have idle days between wells…If oil prices remain above $50/bbl, I expect utilization to increase as the fourth quarter progresses. Increased demand from customers hiring additional fleet and increased utilization of currently deployed fleets are precursors to price improvement.”

The trends in well design also are key to improving Superior’s U.S. land market share. As industry moves to longer laterals, more stages per well and more sand per well, “it should be clear that this trend will impact fracturing utilization and require more horsepower per well completion. More service-intensive wells will also impact many other service lines.

To get back to 100% utilization is going to take higher commodity prices, Dunlap told investors.

Every service line is different, “but I think things like service rigs and flowback assets, fracture stacks, some of the pressure control rentals on location are where as demand goes up, there we’ll start to see some pricing opportunities.” But better pricing overall is unlikely until “the first of 2017,” Dunlap said.

“But I’m also biased to believe that if you feel confident in your ability to execute, you’re better off in getting that price improvement with a customer that you’re currently working for as opposed to go into an open bidding process. That’s part of our rationale in trying to activate part of our well services fleet, as well as fracturing equipment, in a period of time that we think just before prices go up.”

E&P customers have come to the realization that the market “is likely to tighten in 2017 and there will be a call on improved prices when that happens. I think some of the behaviors that we’re experiencing here over the last few months from some of our larger customers is indicative of companies that know they’re going to be spending more in 2017 and want to get their supply chain in order today so that they can kind of hit the ground running as soon as possible.”

The onshore completion and workover services segment recorded revenue of $125.0 million, an 8% increase sequentially but 38% lower than in the year-ago period. On a sequential basis, the revenue increase was driven by higher well fracturing utilization as completion activity, primarily in the Permian Basin, increased during the quarter.