Rystad Energy is forecasting horizontal oil completion activity in the U.S. onshore will outpace drilling operations by 30% in the second half of 2016, resulting in a sharp contraction in the drilled but uncompleted (DUC) inventory by 800 wells. 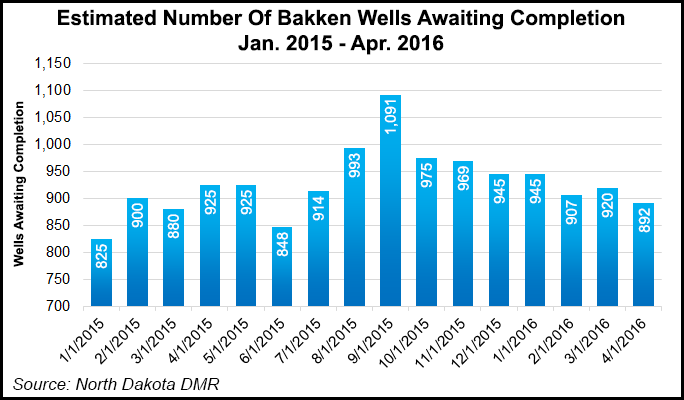 “These additional completions will support total U.S. oil output by providing an additional 300,000-350,000 b/d to the exit 2016 rate,” Rystad researchers said. That would be “more than sufficient to balance the base production decline.” An inventory of 4,000 DUC oil wells may hold close to 2 billion bbl of reserves.

“Research shows that operators are now starting to complete wells that have previously been put on hold deliberately,” Senior Analyst Artem Abramov said. “This comes as more than 90% of the accumulated oil DUC inventory can be commercially completed” at a West Texas Intermediate (WTI) oil price of $50/bbl.

North Dakota, home to the Bakken Shale, suffered from an all-time historical production decline rate in April of 70,000 b/d, far outside the “natural” 10,000-20,000 b/d decline rate (see Shale Daily, June 16). The collapse in production was not totally unexpected, given current completion activity and mature base production, Abramov said. However, the significant decline acceleration appears to have come from older “low decline” wells brought online before 2016, he said.

“It is not the first time such temporary shifts in base decline are observed, and they were caused by road restrictions imposed by the state over the month,” Abramov said. “This trend is unlikely to persist and should not be extrapolated to the U.S. shale industry in general.”

In fact, exploration and production (E&P) companies are publicly indicating a bit more optimism. Many remain cautious about volatile prices with a “muted” ramp-up in activity to the end of the year, said participants at Wells Fargo’s inaugural West Coast Energy Conference in San Francisco. Prices today are above where E&Ps had set 2016 budgets, while efficiencies continue to improve.

“Most operators cited $60/bbl-plus as the level needed to ramp activity/grow without external capital,” Wells Fargo analysts said in their review of the two-day conference this week. The overall tone was “much improved” from a Wells Fargo conference held in December.

The improving commodity price environment “is shifting discussions from a balance sheet focus to those centered around growth. Still, we get the sense that E&Ps, with one foot on the gas pedal, are looking for more certainty before pressing down. That certainty would come in the form of price consistency as the commodity price head fakes in the summer of 2015 remain in the back of producers’ minds.”

“On the service cost side, it’s clear that consensus believes we are at a bottom, the decline has flattened, and we’re likely to begin to see an increase in costs, but maybe not immediately,” Wells Fargo analysts said. Halliburton Co. CFO Mark McCollum, who participated, said North America was “coming off the bottom” but added that the recovery would not be a straight line (see Shale Daily, June 22).

Anadarko Petroleum Corp. CEO Al Walker told the Wells Fargo audience that oil should be higher priced in the future given that cash cycle times aren’t fast enough to drive industry growth below $60/bbl. The wellhead returns remain solid but it’s taking too long to drive cash returns, which is driving an “unsustainable disconnect” between spending and cash flow at current prices. Management is anticipating “some” price correction near-term before a more stable period of recovery.

Most of the executives presenting said about half of their companies’ well cost savings had come from efficiencies, and this, “in theory, should be sustainable on a rebound,” according to Wells Fargo analysts. Most “said they expected costs to follow pricing, and all service companies stated in one form or another that pricing must increase (as you would expect). But the general sense we got from E&Ps is that they are not overly concerned at this point in the cycle.”

A newly released survey of energy investors by Sanford Bernstein is seeing some optimism for oil and natural gas prices to improve. Analysts Bob Brackett, Andrew Pizzi and Jackson Kulas have conducted 28 quarterly surveys. In the latest conducted June 7-15, the “conviction” is shifting toward higher price expectations. During the time period that the survey was conducted, the 12-month West Texas Intermediate (WTI) forward oil strip traded at $48.80/bbl, while the natural gas strip averaged $2.33/Mcf. Since the first quarter survey, the WTI strip rose by 15% and Henry Hub strip prices increased by 25%.

Sentiment on higher oil prices has improved dramatically, with 84% of the respondents voting for near-term prices of $50/bbl WTI or higher, versus only 22% in the first quarter survey.

About 40% of the respondents said oil producers had the most upside. But sentiment toward OFS was higher quarter/quarter at 25% from 10% — the highest since 2Q2014.

“Marginal cost of supply” continues to be the primarily driver of oil prices, according to the survey, followed by global inventories, global spare capacity and emerging market growth. “Investors’ long-term expectations about oil prices continue to be at all-time highs compared to strip prices,” Brackett said. “Survey respondents stand at 36% above the two-year oil price strip and 11% above the two-year gas price strip.”

When asked which energy segment has the most upside over the next year, investors remained “most interested” in oil E&Ps at 39%, with the OFS sector receiving 25% of the votes, followed by natural gas E&Ps and integrated oils. Land drillers and offshore drillers received 12%, while utilities, refiners and construction received 5%.