Employment in the U.S. oilfield services and equipment sector rose by an estimated 2,566 jobs to 640,767 in September after adjustments to August numbers, according to an Energy Workforce & Technology Council analysis of federal data. 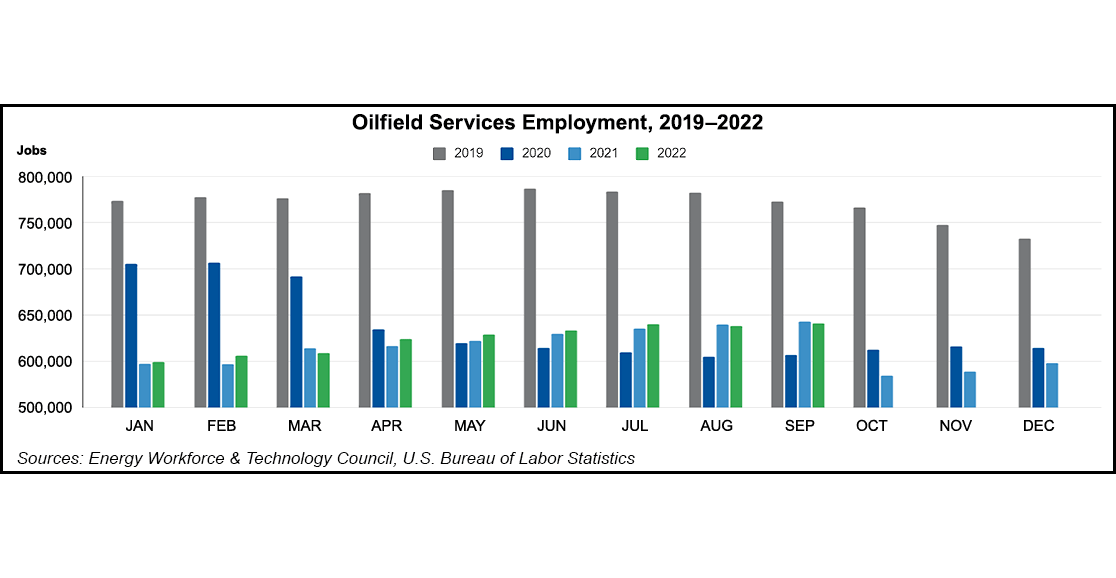 The advance continued a trend as the industry rebounds from the slowdown imposed in 2020 by the coronavirus pandemic. But the pace of gains in the sector did slow, as did job growth overall last month, according to data from the Bureau of Labor Statistics (BLS).

“As the energy services sector continues to rebuild the workforce from pandemic losses, the September increases are encouraging in the face of lower job increases across the country,” said council CEO Leslie Beyer.

Initial BLS data had shown that oilfield services and equipment sector employment rose by 6,865 jobs to 648,914 in August. However, following new revisions, the August adjusted number was 638,201.

Across all sectors, employers added 263,000 jobs in September. That was down from a 315,000 gain in August and marked a second-consecutive monthly easing.

The U.S. consumer price index hit a 40-year high this year, driven in large part by soaring energy costs, including a doubling of natural gas prices in 2022. Russia’s war in Ukraine and the Kremlin’s related pullback on gas deliveries to Europe – as well as Western sanctions against Russia — amplified already precarious energy supply levels on the continent. These factors have raised concerns about both U.S. and global recessions, and hiring has slowed over the past two months in response.

Still, gains in September put OFS employment at the highest level since September 2021, pushing the sector toward the 706,528 total reached in February 2020, prior to the coronavirus-imposed lockdowns that crippled demand that year.

“The industry is producing at almost pre-pandemic levels,” Beyer said.

The U.S. oil and gas industry shed more than 160,000 direct jobs in 2020, with nearly half of those losses coming in Texas amid the fallout of the pandemic, an assessment of the sector by Texas Independent Producers & Royalty Owners Association showed.

The pandemic jolted the industry in the spring of 2020, when government lockdowns ordered to slow the spread of the virus froze travel and choked off demand for transportation fuels made from oil. Crude prices plummeted and producers quickly curtailed output in response. Production declines necessitated spending cuts and layoffs that resulted in a notably smaller workforce.

U.S. crude production averaged 11.3 million b/d in 2020, down 1.0 million b/d from 2019, a result of well curtailment and lower drilling, according to Energy Information Administration (EIA) data. Output had reached a record of 13.1 million b/d in early 2020, just prior to the pandemic’s arrival in North America.

The industry bounced back before the end of 2021 and continued to recover ground this year.

U.S. production climbed to a 2022 peak of 12.2 million b/d during the past summer and held around 12.0 million b/d in September, according to EIA.

What’s more, analysts said a controversial OPEC-plus decision last week to slash production by 2 million b/d in November could motivate American producers to ramp up more in the final quarter of 2022, potentially providing a boost to hiring levels late in the year.

U.S. exploration and production (E&P) companies could increase output to 12.7 million b/d by the end of the year, Rystad Energy said.

“The question is if, and how fast, production can be accelerated,” said Rystad’s Jorge Leon, senior vice president.

Rystad expects prices, already trading in the $90s this week, to top $100 again this quarter and potentially rise further because of the OPEC-plus move. “We believe that the price impact of the announced measures will be significant,” galvanizing U.S. E&Ps to bolster output.