After a sharp retreat down to the $40/bbl range in 2018, Brent crude oil prices are back above $60, and two key dates this spring could provide the momentum to drive prices even higher than currently forecast. 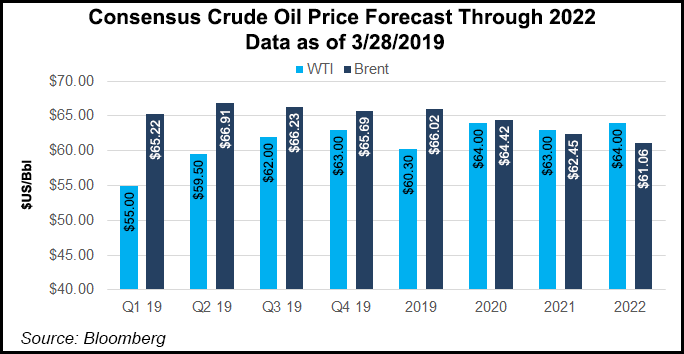 Beginning April 28, non-U.S. companies will not be able to transact with Venezuela’s state-owned oil company Petroleos de Venezuela (PDVSA) in U.S. dollars but can still do so in other currencies. There is risk, however, that the United States “closes the loophole” and reduces crude oil flows further by banning all trade with PDVSA, according to Societe Generale.

During a webinar Wednesday, Societe Generale’s Michael Wittner, global head of oil research, said the move would pose significant upside risk for prices, to the tune of $15. “The U.S. has said that full sanctions are on the table, and trading houses have started to act as if that’s going to happen.”

Venezuela exported 1.1 million b/d in 2018, with the United States purchasing nearly half of that output. A de facto oil embargo placed on Venezuela by the United States in late January has resulted in the country increasing its purchases of sour crude elsewhere, including Latin America, Russia and the Middle East. Meanwhile, Venezuela’s sour crude cargoes have mainly been sent to India and China, though at a discount, according to Societe Generale.

Bigger picture, U.S. sanctions are a complicating factor for the oil markets, but robust shale oil growth has made the country comfortable imposing them. “However, growing output is not the same as spare capacity, and this is why sanctions surprises add upside risk,” Wittner said.

Furthermore, U.S. sanctions are political in nature and therefore unpredictable. “Sanctions do not have a good track record for affecting regime change.”

It’s been two-and-a-half months since the United States has recognized National Assembly leader Juan Guaidó as the interim president of Venezuela. The United States, along with numerous Latin American countries, claim that president Nicolás Maduro won reelection last year in a fraudulent and unconstitutional vote. The sanctions are intended to loosen Maduro’s grip on power in the country, but both Cuba and Russia have lent financial and security assistance to keep him in power, Wittner said.

Meanwhile, the next six-month phase of sanctions on Iran is set to begin on May 4, potentially reducing exports to 1 million b/d, a cut of up to 300,000 b/d, according to Societe Generale. Oil sanctions were reimposed in November and for the first six-month phase, allowable Iranian flows under U.S. waivers were more generous than expected, mainly due to high prices last fall.

Crude production was cut by 1.1-1.2 million b/d, while exports were cut by 1.2-1.3 million b/d from normal levels of 2.5 million b/d. Most exports went to China, India, South Korea and Japan, Wittner said.

“For the next six-month phase, starting May 4, the question is not whether waivers will be extended. The question is what the level of allowable flows will be,” he said.

The United States stands to severely overly tighten the market by not issuing waivers in allowable crude, according to Societe Generale. There is also risk the U.S. cuts are too aggressive at the wrong time.

“The U.S. does not want sharply higher prices, but they could get it wrong and over-tighten the market at the wrong time, just ahead of peak summer crude and product demand,” Wittner said, noting a possible $15 upswing if this occurs.

That said, the United States is very conscious of prices, politics and the economic impacts that sanctions could bring. “Waiver negotiations and decisions will go down to the wire.”

A $15 downside risk could be realized, however, if the global economic growth is significantly slower than expected, mainly due to the U.S.-China trade war. Additional downside risk ($10) is seen if Organization of the Petroleum Exporting Countries (OPEC) supply management is less effective than expected or if production cuts are not extended through the remainder of 2019.

“The Saudis are aggressively leading the OPEC cuts,” Wittner said. “They didn’t wait for January.”