Even as prices recover, U.S. oil production is likely to only inch ahead – at best – in 2021 as producers focus on cash flow and returning capital to shareholders in bids to win back investors’ trust following the severe slump of 2020, economists at the Federal Reserve Bank of Dallas said Monday. 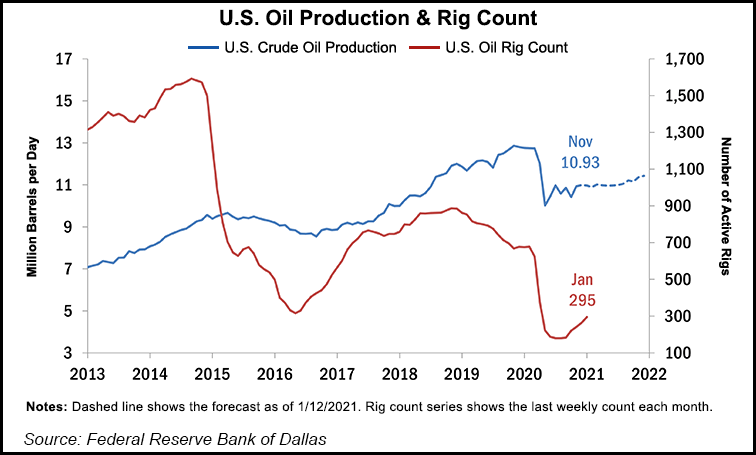 Kunal Patel, an economist at the Dallas Fed, as it is known, said public companies are “reluctant to spend more” on drilling while the pandemic remains a part of American life and a full demand recovery still remains uncertain. Speaking during a webinar hosted on Monday by the International Energy Forum (IEF), Patel noted that most companies during the current earnings season have repeated the same refrain: They are focused on bolstering cash flow in order to support dividends and buy back stocks to increase the value of existing investors’ holdings.

Oil prices sunk into negative territory in the spring of 2020, shortly after virus outbreaks emerged in the United States and travel grinded to a halt. With demand for transportation fuels relatively weak, prices struggled to recover for months.

Amid vaccine programs and increasing expectations for an end to the pandemic later this year, however, demand has started to build and prices have recently climbed to 13-month highs.

Brent crude, the international benchmark, and West Texas Intermediate each were trading above $60/bbl at midday on Monday. At that level, producers across the U.S. oil patch can drill profitably. But Patel said most will patiently wait for assurances that the rebound in pricing is sustainable.

That noted, he and his colleagues at the Dallas Fed expect 2021 production will be “roughly flat” with domestic levels established last year – around 11 million b/d – and far from the highwater mark of about 13 million b/d reached in 2019, prior to the pandemic.

Robert Kaplan, president of the Dallas Fed, said during the same webinar Monday that, until vaccine programs prove successful, the pandemic remains a wildcard. It “is the number one determinant of what kind of year we’re going to have,” he said.

The current expectation at the Dallas Fed is that widespread inoculation will be reached by midyear and that travel will ramp up in the second half of 2021. If that happens, the economy could heat up and demand for transportation fuels derived from oil could spike. Goldman Sachs analysts forecasted that Brent crude prices could reach $75 in the second half of the year.

If all of those things happen, Kaplan said, producers could jumpstart drilling efforts. “If prices get high enough, mindsets could change,” he said.

In the meantime, however, Kaplan said companies dependent on fossil fuels are struggling to attract new investors. “The industry is capital starved,” he said, and therefore it “is a more disciplined industry.” For the coming months, he expects, “we are going to work off excess inventory.”

U.S. crude production for the latest covered week, meanwhile, averaged 10.8 million b/d, down 200,000 b/d from a week earlier and down 2.2 million b/d from a year earlier.

Analysts expect another decline with EIA’s next WPSR on Wednesday. They pointed to the energy crisis that emerged last week in Texas after a rare deep freeze stretched all the way to the southern reaches of the state, causing freeze-offs and forcing production offline.

Speaking during the webinar Monday, Leila Benali, chief economist at Arab Petroleum Investments Corp., noted that the frigid temperatures in Texas created widespread power outages and wreaked havoc in Texans’ lives. While several problems converged at once to fuel the debacle, she said one lesson is clear: “It is high time” for Texas to bolster its energy infrastructure and safeguard it against winter conditions.

Joseph McMonigle, secretary general of the IEF, also speaking during the webinar, agreed and said countries across the globe need to take steps to brace for challenges caused by climate change. “We have to get ready for more unexpected and extreme weather events,” he said.

With production consistently below year-earlier levels for several months, the Dallas Fed outlook on production is relatively on par with EIA’s forecast that domestic crude oil production will hover around 11.3 million b/d at the end of 2021. U.S. crude production declined 8% to 11.3 million b/d in 2020 because of well curtailment and a plunge in drilling activity, EIA said.

While too early to predict its own growth because leader Saudi Arabia cut production this month, the Organization of the Petroleum Exporting Countries (OPEC) estimated supply would expand by 700,000 b/d this year among countries outside of the cartel and its allies, aka OPEC-plus, and average 63.3 million b/d.

OPEC-plus delegates are scheduled to meet on March 4 and reportedly will consider a production hike beginning as soon as April.

The International Energy Agency, in its February outlook, estimated that total supply outside of OPEC-plus would rise by 830,000 b/d in 2021 versus an annual decline of 1.3 million b/d in 2020.