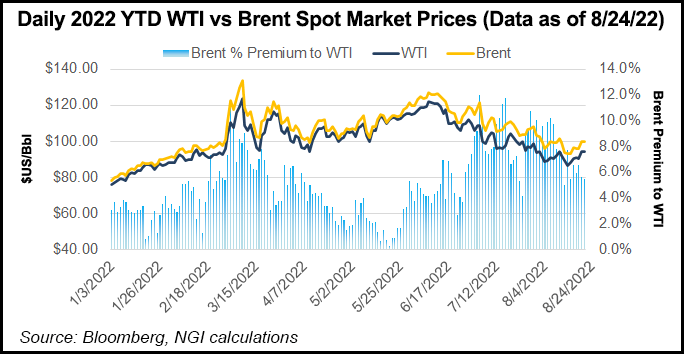 Production for the week ended Aug. 19 declined by 100,000 b/d to 12.0 million b/d, the U.S. Energy Information Administration (EIA) said Wednesday in its Weekly Petroleum Status Report. Output had reached a pandemic-era high of 12.2 million b/d earlier in the summer, though it remained roughly 1 million b/d below pre-coronavirus peak in early 2020.

With production down last week, U.S. commercial crude inventories, excluding those in the Strategic Petroleum Reserve, decreased by 3.3 million bbl from the previous week, EIA said. Still, at 421.7 million bbl, stocks were about 6% below the five-year average.

Output has been slow to climb this year, with exploration and production companies trying to strike a balance between strong but choppy global supply needs and political pressure to invest more in renewable energy to mitigate climate change.

U.S. petroleum demand for the Aug. 19 period, meanwhile, dropped 9% week/week to 19.3 million b/d, led lower by waning consumption of gasoline. Americans have scaled back spending amid high prices at the pump and across the economy, analysts at Enverus Intelligence Research noted.

Additionally, with inflation near a 40-year high and the Federal Reserve aggressively raising interest rates to combat it, recession fears are intensifying. Historically, when rates spike, the economy has slowed substantially. Energy demand has followed suit.

West Texas Intermediate crude, the U.S. benchmark, see-sawed in morning trading and hovered around $93-94/bbl Wednesday, down nearly 20% from its summer peak reached in June.

Worldwide demand is still expected to grow this year as travel and industrial consumption further recover from the early pandemic doldrums. But projections, rosy early in the year, are less so now.

The Saudi Arabia-led OPEC this month cut its world oil demand outlook by 260,000 b/d from an earlier forecast to about 100 million b/d for 2022.

It cited slowing economic conditions across the globe, notably including the United States. The U.S. government earlier this month reported that gross domestic production shrank in both the first and second quarters of 2022.

OPEC and an allied group of oil-producing nations led by Russia this month agreed to increase output by 100,000 b/d in September. That would bring the OPEC-plus total production target back to pre-pandemic levels after a long recovery from the depths of the pandemic in 2020. But it marked a substantially slower production pace than the cartel has been on this summer.

Russia is a major wildcard on the supply side, given its invasion of Ukraine and Western sanctions imposed to protest the war, Rystad Energy analysts said.

To date, Russia’s energy complex has proven resilient in the face of economic sanctions from the United State and Europe, the analysts said. They noted that Russia boosted oil production in June and July following a roughly 1 million b/d drop in April, when early waves of sanctions kicked in. The July total approached the 10 million b/d level seen before Russia’s February invasion of its eastern European neighbor.

Asian demand for Kremlin-backed oil, sold at a discount, had offset waning Western consumption. However, the full impact of sanctions won’t be realized until later this year, when a European Union (EU) embargo on Russian oil imports becomes official during the fourth quarter. That, coupled with mounting domestic economic challenges in Russia as the war rages on, is expected to hinder demand and hurt the Kremlin by late fall, the Rystad team said.

EU imports of Russian crude are expected to dwindle to just 600,000 b/d by December 2022 – a huge drop from the 3 million b/d before the Russia-Ukraine conflict, Melnik said.

OPEC-plus policymakers are scheduled to meet next on Sept. 5 to decide production targets for October. Given Russia’s challenges, analysts at ClearView Energy Partners LLC said the producer group could lower its production targets again.