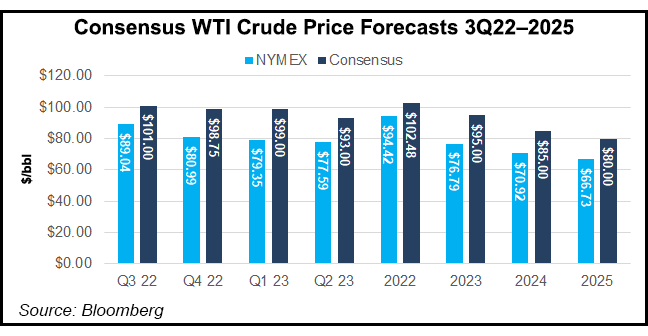 Production for the period ended Sept. 2 was on par with the prior week at 12.1 million b/d, EIA said in its Weekly Petroleum Status Report. That kept output within striking distance of the 2022 high of 12.2 million b/d reached earlier in the summer.

Exploration and production (E&P) companies have been cautious about bolstering activity too aggressively amid political pressure to focus more on renewable energy and Wall Street demands to return capital to investors. However, E&Ps boosted production early in the summer and have since kept output near or above the 12 million b/d level to meet demand. While uneven week/week amid price volatility, consumption remains well above the pandemic-era lows of 2020 and early 2021.

U.S. benchmark West Texas Intermediate (WTI) prices hovered near $84/bbl Wednesday. That was down about 30% from the high mark of 2022 in June. Still, WTI is up more than 10% for the year.

Total petroleum demand for the latest EIA period, meanwhile, was 19.9 million b/d, off slightly from 20.0 million b/d a week earlier. Steady consumption of gasoline heading into the Labor Day Weekend supported the demand side.

Still, at 427.2 million bbl, stocks were about 3% below the five-year average.

The latest EIA data follow news from OPEC-plus earlier in the week. The cartel, led by Saudi Arabia in partnership with Russia, said it would reduce its crude oil output by 100,000 b/d in October.The move would effectively offset a targeted increase of 100,000 b/d in September. OPEC-plus had said in August that its production levels would return to pre-pandemic norms this month after a long recovery from the depths of the pandemic in 2020.