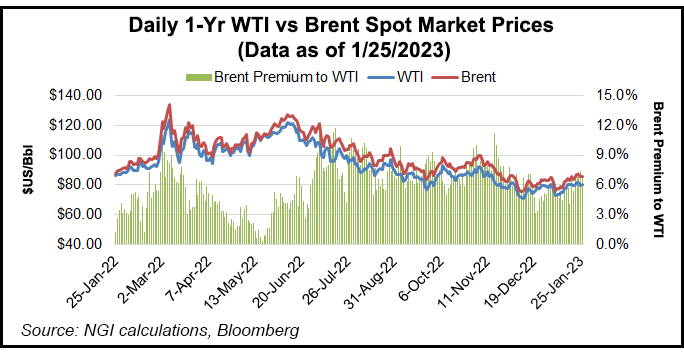 The U.S. Energy Information Administration (EIA) said Wednesday output for the period ended Jan. 20 clocked in at 12.2 million b/d – matching the high mark of the past two years and on par with the two prior weeks of this year. It was up 100,000 b/d from late 2022, data from EIA’s latest Weekly Petroleum Status Report showed. The latest reading also eclipsed the year-earlier level of 11.6 million b/d.

Still, crude production remains well below the 13.1 million b/d record level reached in early 2020 prior to widespread coronavirus outbreaks. Exploration and production companies are navigating a market in which forecasters from OPEC and the International Energy Agency expect crude consumption growth this year but also caution about the specter of at least a mild recession in the United States and globally.

Americans’ spending recovered from pandemic lows over the past two years – and across much of the world — but many are increasingly cautious this year because of recession worries. Similar developments are unfolding in Europe and parts of Asia.

An Ernst & Young survey of 1,200 CEOs across the world found that 98% are braced for gross domestic product contraction this year. Many cited eased consumer spending.

Two-thirds of economists recently surveyed for the World Economic Forum (WEF) expect a global recession in 2023.

“The global economy is in a precarious position. The current high inflation, low growth, high debt and high fragmentation environment reduces incentives for the investments needed to get back to growth,” said WEF’s Saadia Zahidi, managing director.

Nevertheless, EIA forecast in its January 2023 Short-Term Energy Outlook that U.S. oil production would average 12.4 million b/d in 2023 and 12.8 million b/d next year, both surpassing the previous annual average record of 12.3 million b/d set in 2019.

In 2022, domestic production averaged an estimated 11.9 million b/d, EIA said. Increases in the Permian Basin are expected lead increases this year and next, the agency said.

Meanwhile, U.S. commercial crude inventories, which trailed historic averages throughout 2022, switched to a surplus to start 2023 and remained in that territory last week. With consumption now falling and production relatively strong, stocks increased by 500,000 bbl in the Jan. 20 period.

That left stockpiles, excluding those in the Strategic Petroleum Reserve, at 448.5 million bbl — 3% above the five-year average, according to EIA.