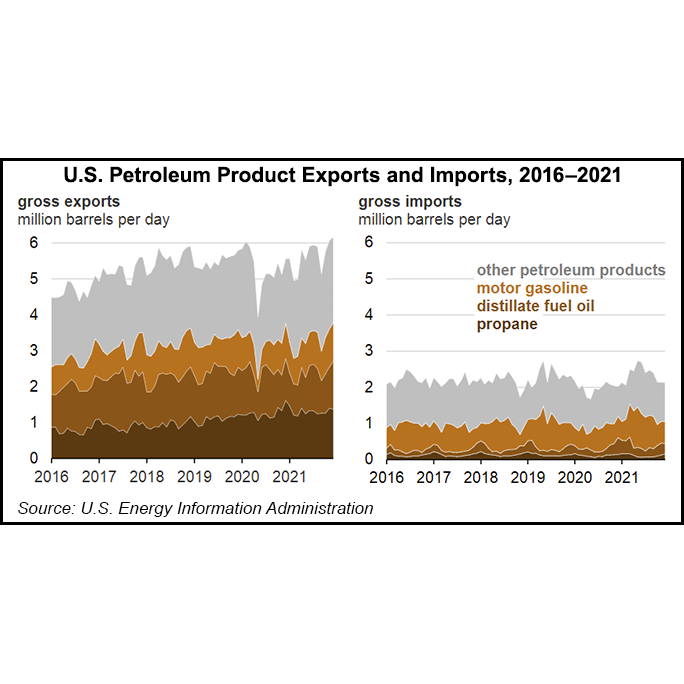 U.S. production for the week ended April 8 held even with the prior week at 11.8 million b/d — after hovering around 11.6 million b/d through most of February and March.

Output, however, remains more than 1 million b/d below pre-pandemic highs and may struggle to climb in the near term, given mounting demand uncertainty caused by geopolitical strife and a resurgence of the coronavirus pandemic.

Crude prices have proven choppy in recent weeks but have generally held at lofty levels near or above $100/bbl amid supply threats in the wake of Russia’s invasion of Ukraine. High prices have begun to impact demand, yet threats fester against global supplies.

Steep Western sanctions against the Kremlin in protest of the war, including a U.S. ban on Russian imports, have cut into global supplies. Russia is the second-largest oil exporter in the world behind Saudi Arabia.

U.S. companies have been under pressure to increase output to offset the Russian impact. But producers are grappling with inflation themselves, including high labor costs, that have made it difficult to ramp up quickly.

Additionally, they are hesitant to move too fast, given a rebound of coronavirus cases in China and parts of Europe. Strict lockdowns in China have this month cut deeply into demand, according to Rystad Energy. Shanghai, China’s largest city, has largely been shuttered in recent weeks as cases soared. The city of about 26 million reported record daily infections earlier this week.

The International Energy Agency (IEA) on Wednesday updated its outlook to account for similar concerns.

“Severe new lockdown measures amid surging Covid cases in China have led to a downward revision in our expectations for global oil demand in 2Q2022 and for the year as a whole,” IEA researchers said in their monthly oil market report.

IEA said it expected Russia’s output to drop by 1.5 million b/d in April, reflecting fallout from the war and sanctions. The decline could accelerate to 3 million b/d in May, the agency said, as global buyers voluntarily boycott Kremlin-controlled supplies on top of sanctions.

“Despite the disruption to Russian oil supplies, lower demand expectations, steady output increases from OPEC-plus members along with the U.S. and other non OPEC-plus countries, and massive stock releases from IEA member countries should prevent a sharp deficit from developing,” the researchers said.

IEA expects global demand to be balanced with supply in the second quarter at 98.3 million b/d.

The United States and allied countries in the West committed to releasing 240 million bbl of oil from strategic reserves this year to offset the impacts of sanctions against Russia.

OPEC-plus, an extension of OPEC, recently agreed to extend monthly production increases of about 400,000 b/d into May. This has been policy since August 2021.

OPEC researchers on Tuesday lowered their forecasts for both global oil demand and production in 2022, citing lighter economic growth and the Russia-Ukraine conflict. The cartel said consumption this year would grow by 3.7 million b/d to 100.5 million b/d, though that was about 500,000 b/d lower than its outlook last month.

The researchers said supplies from outside of OPEC-plus would rise by 2.7 million b/d this year. However, that was about 300,000 b/d lower than the prior projection. They said the war had cut into supplies in the wake of sanctions but also exacerbated inflation to a point that demand is tapering in some corners of the world.