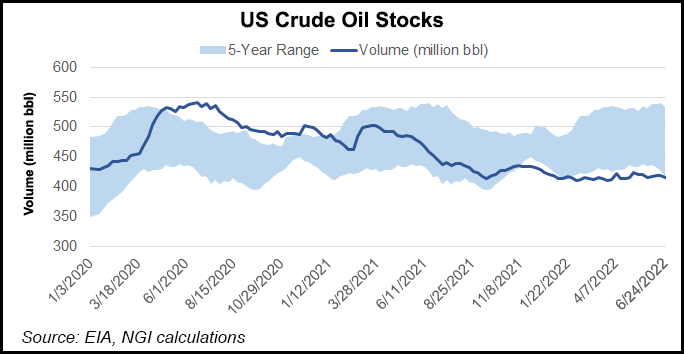 Production climbed to 12.1 million b/d for the week ended June 24, up 100,000 b/d week/week, according to the EIA’s Weekly Petroleum Status Report (WSPR).

Exploration and production (E&P) companies are trying to strike a balance between investments in long-term renewable energy projects and quenching the world’s current thirst for oil.

“Global oil demand is expected to breach 100 million b/d this summer for the first time since before the pandemic,” said Rystad Energy analyst Louise Dickson. Production is on track to hold just below that level through the summer months.

The Biden administration has at once pushed E&Ps to pursue greener energy and bolster crude output, causing confusion and leaving operators dubious about aggressive investment plans.

Dickson noted that both U.S. producers and members of OPEC have modestly increased output this year, with supplies from Russia uncertain amid that country’s invasion of Ukraine. Western sanctions against Russia have limited its export options and required European countries to rely more on the United States and Saudi Arabia-led OPEC for crude supplies as the summer travel season heats up.

Russia, the world’s third-largest oil producer, was generating about 10 million b/d of crude prior to its invasion of Ukraine. Rystad estimated that about 800,000 b/d of Russian crude capacity emerged following Western sanctions this spring. These penalties included U.S. and European Union embargoes on Kremlin-backed oil.

The supply/demand imbalance has put upward pressure on crude prices. Brent crude topped $117/bbl Wednesday. The international benchmark is up about 50% this year.

Why Producers Are Reluctant

All of this, as Rystad notes, begs the question: Why are U.S. producers only boosting output gradually? In addition to political and investor pressure to focus on renewables, Dickson said there is substantial uncertainty about Russia’s capabilities and whether high prices may dampen demand.

In recent weeks, Russia has claimed it has begun to cut into its spare capacity as China and India step in to buy its crude at discounts, muddying the supply picture. And while demand overall is expected to rise this summer and for the year, according to both OPEC and International Energy Agency estimates, lofty crude prices and, by extension, gasoline prices that reached a U.S. record in June add wildcards.

“The oil market is continuing to digest how to price in the significant reshuffle of Russian barrels on the market,” Dickson said. Still, for now, “physical supply remains tight, crude and product inventories are at record lows, and refineries remain strained in delivering products to the market as economies open” following the pandemic “and demand more transport fuels,” Dickson said.

U.S. output remains about 1.0 million b/d below the pre-pandemic high.

Domestic crude inventories for the June 24 period, excluding those in the Strategic Petroleum Reserve, decreased by 2.8 million bbl from the previous week. At 415.6 million bbl, stocks are 13% below the five-year average.

EIA reported two weeks’ worth of petroleum supply/demand data on Wednesday after a power spike damaged the agency’s hardware and forced the postponement of several reports. Production for the week ended June 17, at 12.0 million b/d, was on par with the prior week.

On the demand side, consumption has been essentially flat so far in June.

Total petroleum demand for the June 24 period inched ahead 0.5% from the prior week to 20.0 million b/d. Average products supplied over the last four-week period also held at 20.0 million b/d, even with the same period in 2021.

OPEC and an allied group of producers led by Russia plan to meet Thursday to firm up production targets for the summer and potentially beyond.

When the cartel known as OPEC-plus met last month, it agreed to boost production in July and August by 648,000 b/d, advancing a previously planned bump for September. The new goal marked an increase from the roughly 430,000 b/d jump it targeted for June.

Notably, however, OPEC-plus on the whole fell short of its production targets during the spring months. Officials have since cautioned that some member countries continue to struggle with aging infrastructure, inflation and political strife.

Oil production among the 13 countries that make up OPEC dropped by 176,000 b/d in May to average about 28.5 million b/d, the cartel said. It said broader OPEC-plus output fell nearly 3 million b/d below its goal of 42 million b/d in May.

Given that OPEC-plus accounts for nearly half of the world’s supply, analysts said U.S. producers are bound to face further pressure to raise output more. However, despite demand and favorable prices, they are hesitant to move with haste because of the “overhang” of unclear U.S. energy policy, said Evercore ISI analyst James West.

He said producers are frustrated and cautious because politicians and regulators have pushed “to accelerate the energy transition” to renewables “without considering the ramifications that it would cause in the near term” – most notably a shortage of crude.