On a day when President Biden launched a Middle East tour in part to press for greater crude output, U.S. officials said American oil production declined along with consumption. A global energy watchdog also lowered its demand outlook, citing the specter of recession. 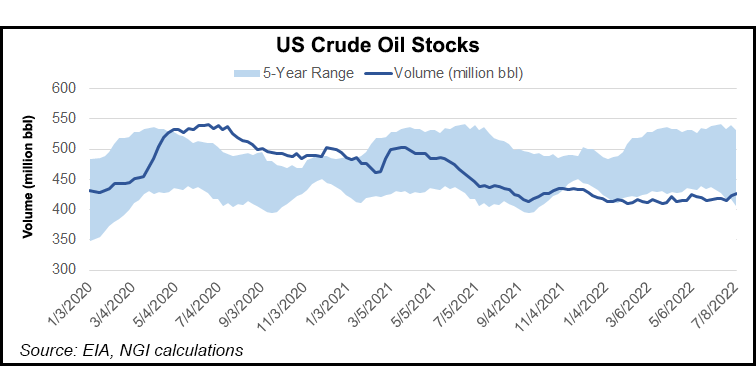 One week after reaching a 2020 high, U.S. producers pumped 12.0 million b/d for the period ended July 8, down 100,000 b/d from the prior week, the U.S. Energy Information Administration (EIA) said Wednesday.

Production remains about 1 million b/d below the pre-coronavirus weekly peak.

Exploration and production companies have tried to strike a balance between increasing – but choppy – global demand in the wake of the pandemic with other considerations. These include the need to invest in renewable energy, at Biden’s and investors’ behest, and mounting uncertainty about demand later this year and next, given rising interest rates and increased likelihood of economic downturn. When recessions strike, demand for travel fuels derived from oil tends to drop.

As part of his trip this week, Biden is slated to visit OPEC leader Saudi Arabia on Friday. Analysts widely expect the president to renew in person previous public calls for the cartel to ramp up output in the face of lofty fuel prices.

However, high energy costs have helped fuel the broader inflation that central banks, including the U.S. Federal Reserve, are now trying to combat with interest rate hikes. Higher rates tend to cool economic activity and can help tame inflation. But historically, when rates rise quickly as they are this summer, they also stunt economic growth and energy demand.

That could make it difficult for OPEC – or Saudi Arabia on its own – to deliver significant production increases beyond what it already promised this summer. OPEC and allied oil-rich nations that include Russia, aka OPEC-plus, targeted output growth of 648,000 b/d in July and August. It marked an increase from the roughly 430,000 b/d jump it targeted for June.

What’s more, OPEC-plus on the whole fell short of its production targets during the spring months. Officials have since cautioned that some member countries continue to struggle with aging infrastructure, inflation and political strife – and the cartel is again short of goals early this summer.

If Biden “is hoping” that his trip “will yield an immediate and significant tranche of extra oil supply from Arab Gulf producers, he will likely be disappointed,” said Bill Farren-Price, director at Enverus Intelligence Research.

The Paris-based agency also raised its world supply forecast for this year by 300,000 b/d to 100.1 million b/d. IEA said previously anticipated cuts to Russian crude output because of Western sanctions amid the war in Ukraine have yet to prove as severe as initially expected. The agency raised its Russian oil production estimate by 240,000 b/d to 10.6 million b/d.

Still, IEA analysts noted in a report, global economic uncertainty has ignited fresh volatility into oil prices this summer and made forecasting somewhat dubious. After hovering above $100/bbl most of the spring and early summer, Brent crude prices fell below that threshold this week.

“Rarely has the outlook for oil markets been more uncertain,” the IEA researchers said. Amid soaring inflation and rising interest rates, “fears of recession are weighing on market sentiment, while there are ongoing risks on the supply side. For now, weaker-than-expected oil demand growth in advanced economies and resilient Russian supply has loosened headline balances.”

Earlier this week, OPEC said its forecast for global oil demand growth was unchanged from a month earlier at 3.4 million b/d in 2022. That would push average demand for the year to 100.3 million b/d.

Next year, the cartel said, projected demand growth of 2.7 million b/d would lift the annual average to 103.0 mb/d.

OPEC researchers said their outlook was “supported by a still solid economic performance in major consuming countries, as well as improved geopolitical developments and containment of Covid-19 in China.”

In its WSPR on Wednesday, EIA said U.S. commercial crude inventories, excluding those in the Strategic Petroleum Reserve, increased by 3.3 million bbl last week. At 427.1 million bbl, stocks are about 5% below the five-year average.