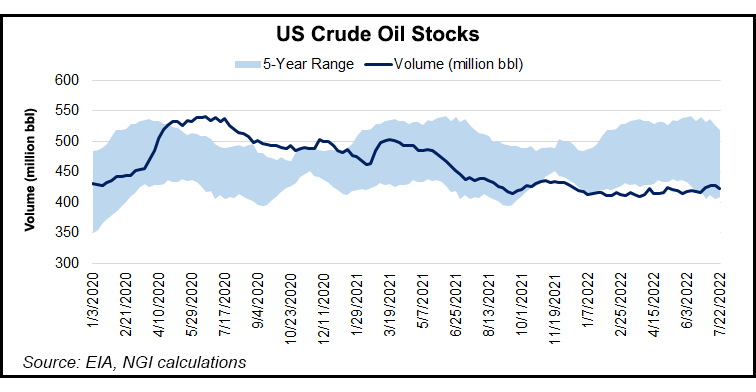 But producers ramped back up during the week ended July 22, boosting output by 200,000 b/d week/week to average 12.1 million b/d, the U.S. Energy Information Administration (EIA) said Wednesday in its Weekly Petroleum Status Report.

Total petroleum demand, meanwhile, declined 5% week/week after jumping 12% the prior week. Consumption has proven choppy this summer amid volatile fuel prices. But, overall, demand is up on the year and widely expected to remain so because of increased travel following the doldrums of the pandemic.

While production is higher this year – after a weak 2021 imposed by coronavirus outbreaks and calls for more investments in renewable fuels – it remains about 1 million b/d below the pre-pandemic peak.

U.S. commercial crude inventories last week, excluding those in the Strategic Petroleum Reserve, decreased by 4.5 million bbl from the previous week and stood at 422.1 million bbl, or 6% below the five-year average.

Global production similarly remains low relative to the highs before the pandemic started in March 2020 and continues to trail projections for demand this year.

OPEC-plus targeted output growth of 648,000 b/d in July and August. It marked an increase from the roughly 430,000 b/d jump it targeted for June. But the group acknowledged that it fell short of its June goal, and its targets for the summer also may prove too aggressive.

Analysts have repeatedly noted that members of the cartel have struggled this year to meet production targets because of aging infrastructure, political strife and war.

This includes OPEC-plus member Russia following its invasion of Ukraine. While Western sanctions against Russia have proven slow to hamper the Kremlin’s energy complex, they appear to be gradually eroding its financial health and, potentially, its production ability long term, according to Rystad Energy.

“We are starting to see the potential impacts of Western sanctions on Russian oil and gas revenues,” said Rystad’s Daria Melnik, senior analyst.

On the consumption side, OPEC forecast global oil demand growth of 3.4 million b/d in 2022. That would push average demand for the year to 100.3 million b/d.

Its production projections, combined with EIA data, put output on a path shy of 100 million b/d this year.

Because of this, Biden last week reportedly pressed Saudi leaders to consider new efforts to further bolster supplies and help reduce costs. While gasoline and jet fuel costs have come off their 2022 peaks in July, they remain far ahead of 2021 prices and within striking distance of records.

Rystad analysts said that, while OPEC-plus on the whole has little more room for growth, leaders Saudi Arabia and United Arab Emirates have reported spare capacity they could tap to boost the cartel’s targets.

OPEC-plus is scheduled to meet Aug. 3 to discuss production goals.