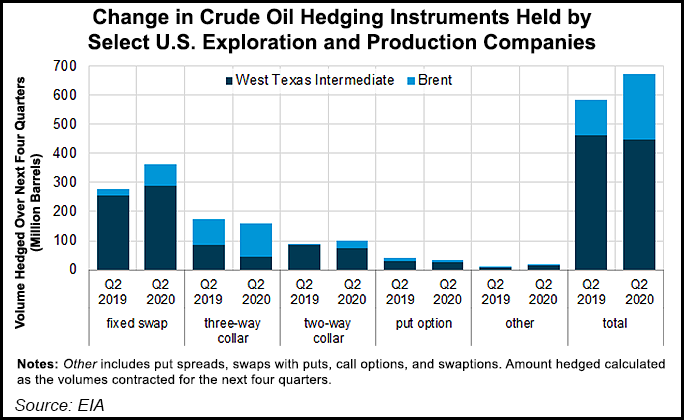 Energy companies ramped up hedging activity as the demand and price shocks of the coronavirus pandemic roiled the oil and gas sector during the second quarter.

These companies accounted for 3.9 million b/d, or 36% of total U.S. crude oil production, in the second quarter, a large enough sample to provide a snapshot for the broader industry. Producers hedge to lock in prices or a range of possible prices that they will receive when selling oil in the future to minimize exposure to price swings. If these companies produce at the same level that they averaged during 2Q2020, EIA said, their hedges will cover 47% of production during the following year, up from 41% for the year earlier period.

“But this volume was 14 million barrels less than the amount hedged during the equivalent period in Q2 2019,” EIA said. “Conversely, Brent-linked hedged volumes grew from 121 million bbl to 225 million bbl during the same period, and their share of total hedged volumes grew from 21% to 33%…The increased use of Brent-linked derivatives is likely driven at least in part by the increasingly large volumes of crude oil that are exported from the United States — exports that are typically priced relative to Brent.”

Additionally, the EIA analysis found that 50% of the companies’ WTI hedges over the next four quarters were hedged with a price of at least $48 per bbl in 2Q2020, down from $56 during the year-earlier period. Brent price hedges also fell, declining from $54 to $52.

“By comparison, as of September 25, the average price of crude oil futures for delivery between 4Q2020 and 2Q2021 stood at $41.05  for WTI and $43.13  for Brent, making these hedged prices higher than recent futures market prices,” EIA said.

In a separate report, citing U.S. Bureau of Safety and Environmental Enforcement (BSEE) data, EIA said Hurricane Laura, which made landfall on Aug. 27, reduced crude oil production in the federal offshore Gulf of Mexico (GOM) by an estimated 14.4 million bbl during the 15 days rigs were shut down. It marked the greatest impact since the combined effect of Hurricanes Gustav and Ike in 2008.

Shut-ins reached a daily high of 1.56 million bbl on August 25, in anticipation of Laura. That level was equivalent to an 84% cut to the region’s average daily crude production in 2019.

The Laura-imposed shut-ins, however, fell well short of the combined production disruptions following Hurricanes Gustav and Ike in 2008 and Hurricane Katrina in 2005. According to BSEE reports, “Hurricanes Gustav and Ike shut in at least 69 million bbl over a span of 168 days,” EIA said. “Hurricane Katrina and later Hurricane Rita collectively shut in at least 163 million barrels of production over a span of 298 days.”