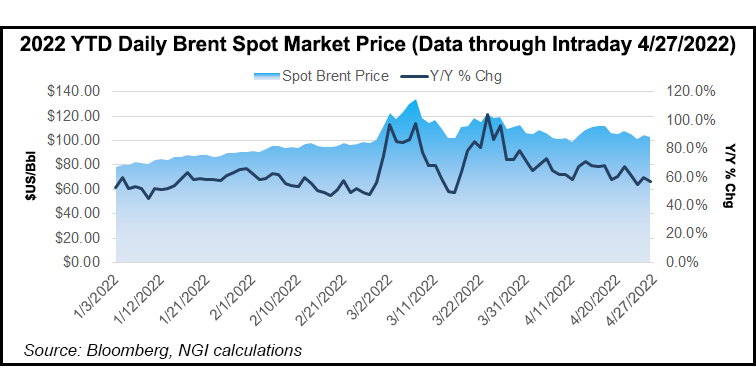 Demand climbed 4% week/week to 19.8 million b/d. It marked the second consecutive weekly gain after a slump that spanned late March and early April amid the high prices for gasoline and other fuels during Russia’s war in Ukraine. U.S. gasoline prices hit a record in March, according to AAA.

Prices at the pump, already rising amid forecasts for slow supply growth this year, surged after Russia invaded Ukraine in late February. Western sanctions against the Kremlin in protest of the war, including a U.S. ban on Russian oil imports, shaved more than 1 million b/d from global supplies.

Brent crude prices, the international standard, and West Texas Intermediate, the U.S. benchmark, have fluctuated this month. But each has generally held near or above $100/bbl – more than 50% above year earlier levels.

After prices spiked, demand tapered. However, with the arrival of spring weather and increased travel, consumption has begun to recover and last week approached pre-war levels.

With the gains in consumption over the past two weeks, “demand continues to grow” and “is now tracking above its five-year average,” said BMO Capital Markets analyst Randy Ollenberger.

Global demand, too, was dented in recent weeks, in part because of prices and coronavirus flare-ups in China that curbed consumption there, according to the International Energy Agency (EIA). But outlooks still call for growth this year.

OPEC researchers this month lowered their forecast for global oil demand as well, by about 500,000 b/d, citing both the pandemic and lighter economic growth in Asia. Still, the cartel said consumption this year would grow by 3.7 million b/d to 100.5 million b/d.

“However, we are hesitant to raise the ‘white flag’ on 2022 global oil demand” amid rising mobility in the United States and much of Europe and a “potential acceleration in international air travel this summer,” they said. With airport and airplane mask mandates eased in the United States and travel usually high in the summer months, the analysts are anticipating upward demand momentum.

Against the backdrop of rising demand expectations and hits to Russian exports, U.S. producers have been under pressure to increase output. They have responded in recent weeks – though they still have plenty of room for continued growth.

Production for the April 22 period totaled 11.9 million b/d, according to EIA. That was flat from the prior week but even with the highest level to date this year. It marked a substantial increase from the level maintained through much of the first quarter, when output had held around 11.6 million b/d.

Output last week also was up about 1.0 million b/d from a year earlier.

However, U.S. production remains more than 1.0 million b/d below pre-pandemic levels. Output had topped 13.0 million b/d in early 2020 before the coronavirus arrived in widespread form in the United States.

With production up in April, stockpiles increased modestly last week. U.S. commercial crude inventories, excluding those in the Strategic Petroleum Reserve, increased by 700,000 bbl from the previous week. At 414.4 million bbl, however, supplies in storage are about 16% below the five-year average.