Crude output ticked up last week, reaching a new 2022 peak ahead of President Biden’s latest call for U.S. producers to boost activity in the face of soaring prices. 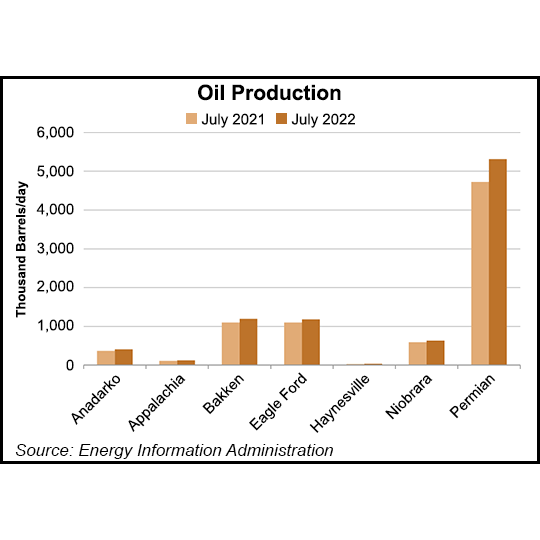 The Biden administration, in particular, has placed a heavy emphasis on renewables and, in its long-term planning, shunned crude and, to a lesser extent, natural gas. But with global demand outpacing supply in the aftermath of the pandemic, oil prices have surged and, by extension, gasoline costs for American consumers have reached record levels above $5/gallon in June.

Brent crude topped $120/bbl Wednesday. The international benchmark is up more than 50% this year.

President Biden blamed in part Russia’s invasion of Ukraine, a move that galvanized the United States and European Union to put embargoes on imports of Kremlin-backed crude. The moves cut into precious international supplies. But the president also chastised U.S. oil companies for prioritizing profits over fair prices for consumers, in his view.

“At a time of war – historically high refinery profit margins being passed directly onto American families are not acceptable,” the president said in a letter Wednesday to major oil companies, including ExxonMobil and Chevron Corp. Such companies “must take immediate actions to increase the supply of gasoline, diesel and other refined” products, Biden added.

Driven in part by surges in energy costs, U.S. inflation spiked to an 8.6% annual rate in May and hit the highest point in more than 40 years, federal data show. Energy costs overall climbed 35% from May 2021. Energy commodities, a subcategory including oil and natural gas, soared 50% year/year and led the upward charge.

The American Petroleum Institute’s (API) CEO, Mike Sommers, in turn called on Biden to provide producers clarity on energy priorities, given that exploration and production of new crude takes months or longer.

It is not, as API members have suggested, feasible to flip a switch on oil production one year and then hastily revert back to renewable investments the next. This explains why production is only rising gradually.

The “administration’s misguided policy agenda shifting away from domestic oil and natural gas has compounded inflationary pressures and added headwinds to companies’ daily efforts to meet growing energy needs while reducing emissions,” Sommers said in a letter to Biden.

In the meantime, forecasters expect demand to climb this year and next, despite high prices.

In its monthly oil report released on Tuesday, OPEC maintained its forecast for demand to increase by 3.36 million b/d in 2022 after rising last year.

It cited economic growth in the United States and an expected surge in activity across China after that country eased pandemic-related lockdowns this month.

OPEC also cited risks imposed by Russia’s war in Ukraine, notably including elevated inflation. The pandemic, too, remains a wildcard.

“Looking ahead, current geopolitical developments and the uncertain rollout of the pandemic toward the end of the second half of the year continue to pose a considerable risk to the forecast recovery to pre-pandemic levels,” OPEC said in the report.

“Nevertheless, oil demand is forecast at healthy levels in the second half of this year.”

OPEC expects global crude consumption to surpass the 100 million b/d mark in the third quarter, on par with earlier projections, and for the 2022 average to reach 100.29 million b/d. That would eclipse the pre-pandemic level of 2019.

While the cartel and allies known as OPEC-plus have targeted increases throughout the spring and have vowed to further raise output this summer, they have struggled to do so.

Oil production among the 13 countries that make up OPEC dropped by 176,000 b/d in May to average about 28.5 million b/d, the cartel said. This was due to political strife in Libya and aging infrastructure in other member countries.

Members of the extended OPEC-plus, notably including Russia, also are struggling. At the latest pace, global production would fall short of the OPEC demand projections for this year.

“While higher prices and a weaker economic outlook are moderating consumption increases, a resurgent China will drive gains next year,” IEA researchers said.

In the United States, total petroleum demand has proved choppy on a week/week basis but is up overall this year. It fell 2.6% in the June 10 period, according to EIA.

However, over the last four-week period, consumption averaged 19.8 million b/d, up 2.3% from the same period last year, despite the high gasoline prices.

U.S. commercial crude inventories last week, excluding those in the Strategic Petroleum Reserve, increased by 2.0 million bbl from the previous week. Still, at 418.7 million bbl, stocks are about 14% below the five-year average.