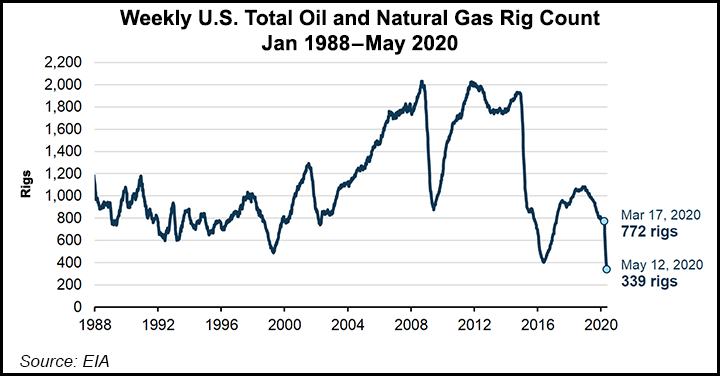 Most of the drilling decline “was in oil-focused geologic plays, but natural gas-focused plays also saw significant decreases,” EIA analysts led by Nicholas Skarzynski said, citing that 71%, or 308, of the laid down rigs came from the country’s top three oil-producing regions: the Permian Basin, the Eagle Ford Shale and the Bakken Shale.

The three areas have seen their rig counts decline by 57%, 64% and 69%, respectively, since mid-March, analysts said.

Drilling activity has declined in natural gas-focused plays as well, they said, although these areas had fewer rigs to begin. There were about 125 gas-directed rigs operating in January, versus nearly 700 rigs targeting oil.

Rig counts in the gassy Marcellus and Haynesville regions fell by 23% and 26%, respectively, from mid-March to May 12, researchers said, noting that while changes in the rig count typically follow oil price movements with a roughly four-month lag, in this case the rig count decline followed the price collapse much more rapidly.

Skarzynksi’s team highlighted that the West Texas Intermediate (WTI) spot oil price started March at $46.78/bbl and ended the month at $20.51, with most of the decline occurring in the first half of the month.

The sharp plunge in the rig count reflects a sudden loss of petroleum demand due to coronavirus mitigation efforts, researchers said, noting that these efforts also led to dramatic oil storage builds.

The decline in natural gas drilling has occurred over a longer time period, researchers said, as gas prices already were at multi-year lows in early 2020.

“Record-high dry natural gas production in November 2019, low demand because of warm weather and relatively small withdrawals from storage during the winter heating season (November 1-March 31) have led to a sustained decrease in the natural gas price,” the analysts said.

“Our main takeaway is that the U.S. demand recovery may be hitting a plateau,” Clearview Energy Partners, LLC analysts said in a note to clients, noting the contrast between last week’s flat demand growth and the previous week’s strong gains.

WTI futures have strengthened this week amid a sputtering recovery in global demand as Covid-19 mitigation measures are relaxed.

The EIA report follows a Tuesday note by Rystad Energy forecasting that U.S. natural gas production will decline every month until November, when it will reach a trough of 82.5 Bcf/d, down from 94 Bcf/d in November 2019 due to Covid-19-related shut-ins and the falling rig count.

The Rystad team expects most of the 11.5 Bcf year/year decline to be driven by natural decline, with only about 1.7 Bcf/d due to shut-ins.

The Rystad team said they expect Henry Hub natural gas prices to be in the $2.50-$3.00/MMBtu range in 2021, triggering a recovery in upstream activity in dry gas basins.