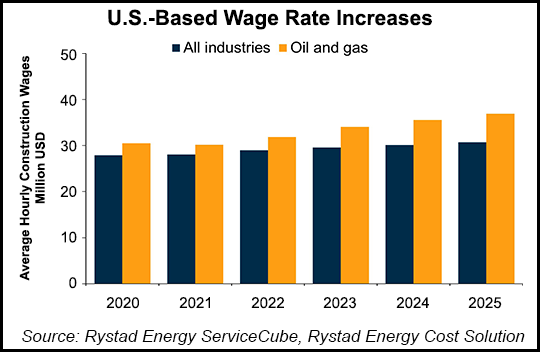 The engineering, procurement, construction and installation (EPCI) segment may be the “first to record a double-digit percentage hike in costs,” according to a new analysis by Rystad Energy.

Domestic EPCI costs, driven by increases in salaries and materials, are forecast to jump by about 10% in 2023 from current levels. Capital expenditures (capex) by U.S. companies for EPCI in 2023 could reach $15.5 billion, or around $1.4 billion higher than under the current cost status quo.

“If EPCI players fail to adapt to the rising costs, those executing lump-sum contracts and using outdated assumptions for procurement and construction indices will see their margins squeezed,” said Rystad analyst Robert Mathey, a supply chain expert. “To mitigate the effects of rising costs, contractors will need to be creative with how they source engineering and procurement services.”

The devastating impact from the pandemic on public health may have passed, but many supply chain issues are forecast to dog the economy into at least next year. That was made clear during the third quarter earnings season, when oilfield services (OFS) operators, as well as exploration and production (E&P) companies, said inflationary concerns were on the rise.

Baker Hughes Co. CEO Lorenzo Simonelli told investors during the quarterly call that the U.S. and global economies were recovering but the pace was being “hampered” by “global ship shortages, supply chain issues and energy supply constraints in multiple parts of the world.”

Halliburton Co. CEO Jeff Miller during the quarterly call said the “labor market is tight”. He pointed to “real challenges,” the OFS giant is confronting. However, he said Halliburton’s “scale, speed and systems” enabled it “to recruit talent nationally and quickly deploy it for our customers.”

On the E&P side, Devon Energy Corp., which works in multiple basins across the Lower 48, is attempting to stay one step ahead “of the inflationary pressures that are impacting not just our industry, but all aspects of the broader society,” COO Clay Gaspar told investors during the quarterly conference call. “The supply chain team is working hard to anticipate issues, mitigate bottlenecks and work with the asset teams to adjust plans to optimize our cost structure and future capital activity.”

Permian Basin pure-play Pioneer Natural Resources Co.  reported “upward pressure” on “tubulars, diesel, cement, sand, chemicals,” CFO Neal Shah told investors. In addition, “it’s gotten a little tighter on the labor side..” Overall, Pioneer is “expecting to see mid-single-digit inflation for the year with…closer to 10% inflation…As you look at 2022, we’re looking at probably something in the mid-single digits from an inflationary standpoint.”

Where Are Wages Rising?

According to Rystad, rising construction wages are likely to account for around $1 billion of the extra capex costs in the 2023 EPCI budgets. The other $400 million mostly is expected from the increased capex for bulk materials and additional engineering labor.

This year, U.S. capex for EPCI is estimated at $12.6 billion, according to Rystad. That means the segment “is poised for a significant spending increase in 2023, irrespective of the cost rise.” Capex is forecast to increase in 2024 to around $18 billion.

Other supply segments also are likely to face higher costs in 2023. Subsea supply costs are set to rise by 8% from 2021, with maintenance and operations climbing 7%, drilling contractors by 6% and seismic by 5%, Rystad researchers said.

“Although the current trend of high oil prices indicates a more favorable economic outlook, the growth of EPCI costs is a cause for concern in the near term,” analysts said. “Costs are expected to rise even further after 2023, with drilling contractor and subsea cost increases becoming the prime headache for oil and gas operators.”

In their breakdown of EPCI costs, Rystad’s researchers said engineering costs for U.S.-based projects would climb by 3-5% in 2022 and by 5-8% in 2023, relative to current levels.

“This projection is consistent with earlier Rystad Energy research pointing toward the growing labor challenges within the oil and gas industry, particularly in attracting and retaining skilled workers,” they said.

Projects that are “later in the life cycle” will feel the pinch too, as the “impact of global supply chain issues ripple across the energy sector and inflate procurement expenses.”

For example, the Port of Los Angeles now is seeing shipments that have to wait to be unloaded. Containers have remained stacked as they await trucks to take delivery. Consequently, Rystad noted, distribution centers nationwide are struggling to fulfill orders.

“Price increases will heavily impact U.S. projects requiring large quantities of cable and pipe from U.S. markets,” according to the forecast. Over the past year, cable prices have risen an estimated 20-50%, with pipe costs up 15% to as much as 70%, depending on the type of pipe material.

“Estimates also show a price increase in higher-level segments of the North American service industry most heavily exposed to raw material increases, most notably in processing equipment procurement, which is set to rise around 7% by 2023 from current prices,” analysts said. “However, if Brent crude oil rises to $100/bbl, that hike could be closer to 15% by 2023.”

Projects under construction face particular cost challenges, the research found. Wages in construction “across all industries” are forecast to jump  around 5% from current levels by 2023.

“This trend is set to be more pronounced in the oil and gas industry, with increases expected to be closer to 15%,” analysts said.

As construction services make up almost one-half of all EPCI costs, driven mostly by labor expenses, rising wages may lead to $1 billion-plus of additional capex for U.S. oil and gas projects in 2023.

In recent years, the EPCI sector has used engineering centers to complete design work, particularly as remote working became prevalent during the pandemic, Rystad noted. Companies are also “seeking out and validating” suppliers in lower-cost regions to ensure projects are economically viable.

However, Rystad noted that the EPCI sector “must be keenly aware of attracting and retaining talent, as the pandemic has led to a worker shortage in the oil and gas and construction industries.

“While cost is a significant factor in the success of a construction project, these companies will also need to consider how shortages in skilled labor and worker turnover will impact project schedules, quality and safety.”