Exploration and production (E&P) companies that work in the United States are expected to have more reserve-based lending (RBL) capital available to them this fall versus last spring, according to the latest biannual survey conducted by Haynes and Boone LLP. 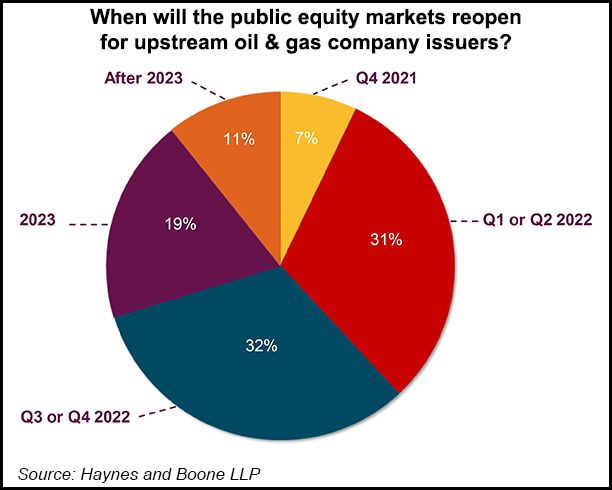 The law firm conducts surveys ahead of each fall and spring redetermination season for RBL, a common type of financing for U.S. E&Ps.

Most of the 84 respondents in the latest survey said they expect borrowing bases to grow by 10-20% in the upcoming redetermination season, with almost none predicting decreases. E&Ps accounted for 40% of the respondents, followed by oil and gas lenders (38%), professional services firms, and other (4%).

The redetermination process protects lenders from fluctuations in oil and natural gas prices, which have strengthened considerably since spring. Researchers highlighted that the New York Mercantile Exchange oil price strip has increased 25% as of Oct. 15 versus last spring, when it was around $60/bbl.

“Notably, lenders are more bullish on borrowing bases increasing than producers,” said the survey authors. “While 38% of producers anticipate no change, 62% of lenders predict at least a 10% increase in borrowing bases.”

Most respondents said reserve-based credit facility borrowers have 50-70% of their production hedged over the next year. Researchers said the increased levels of oil and gas price hedging by producers is a cause for concern.

“Although many producers saw these locked-in hedges as a lifesaver in the down markets of 2020, they now see them as an impediment to cashing in on the price spike days seen in the second half of 2021,” the Haynes Boone team said.

As in the previous survey, respondents said they expect E&Ps to use cash flow from operations and bank debt as their primary sources of capital this year.

“The most notable change in market sentiment is a slight increase in banks as a potential capital source and a slight decrease in alternative capital providers,” researchers said.

The survey also showed resurgent optimism around the oil and gas sector’s access to public equity markets. Nearly two-thirds said they expect these markets to be available in 2022.

“This is an interesting finding given that public equity markets have shunned our industry for the last 18 months,” Grahmann said.