Lower 48 onshore oil and gas permit approvals fell by 10% in January versus December to 1,688, with declines seen across all of the major basins, according to the latest monthly statistics compiled by Evercore ISI. 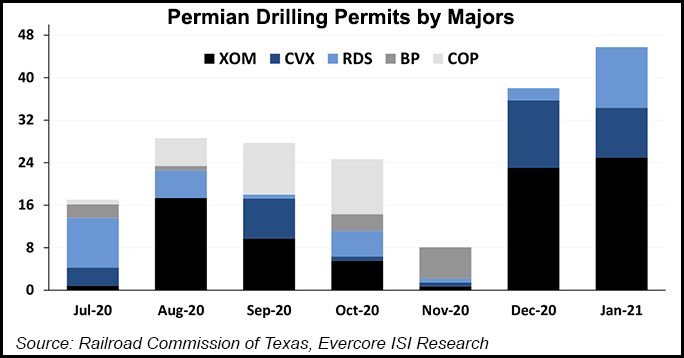 The Permian Basin and Eagle Ford Shale combined to account for 52% of the total permit count, said the Evercore team of researchers led by James West.

Permits in the Denver-Julesburg (DJ)/Niobrara formation fell by 73 or 35% m/m, and the Bakken Shale saw a reduction of 29 or 43% from the prior month.

The Rockies region also included a 45% decline in the Powder River Basin (PRB) to 53 permits.

The Permian decline was driven by independent exploration and production (E&P) companies, as permits granted to majors in the basin actually rose by seven to a six-month high of 47.

As for the larger independents working in the basin, Occidental Petroleum Corp. (Oxy), Devon Energy Corp. and Pioneer Natural Resources Co. saw their permit counts fall by 47, 40 and 25, or 59%, 56% and 63%, respectively.

The Eagle Ford decline was driven in large measure by Marathon Oil Corp. and ConocoPhillips, whose permit totals plummeted by 32 and 21, respectively, or 72% and 73%.

The Bakken permit total of 38 was the lowest count since 2009, with the dropoff driven mainly by Marathon, ConocoPhillips and Devon.

The report follows the sale by Equinor ASA of its Bakken portfolio in a deal valued at around $900 million, suggesting that sentiment around the Williston Basin may be cooling.

The DJ/Niobrara decline was led by publicly traded companies, with only filed one permit for the basin, Evercore researchers said.

The overall tally for oil formations during the month was 1,532 permitted wells, off 9% m/m.

Permits targeting gassy plays fell by 46 or 23% to 15. The Marcellus Shale tally fell by 20% to 65, and the Haynesville Shale dropped by 5% to 80. The Utica Shale permit count also fell by 70% to 11 after four consecutive months of gains, researchers said.

Southwestern Energy Co. did not request a single Marcellus permit in January, while Chesapeake Energy Corp. only sought one permit, versus six in the prior month.

The Evercore team noted that while the overall Haynesville permit count fell by 5% m/m, “data reveals a significant increase by public E&Ps,” whose tally in the formation rose by 30 or 1,500%.

Wyoming and New Mexico are expected to be the states most impacted by a long-term ban of federal onshore leases.