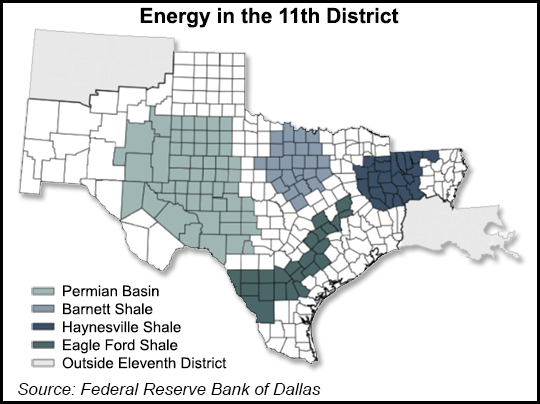 According to quarterly Dallas Fed Energy Survey, the survey’s broadest measure of sentiment among Eleventh District energy firms — the business activity index — turned positive at 13.8, up sharply from minus 42.1 in the first quarter. The survey assessed energy activity for companies located or headquartered in the Eleventh District, which includes Texas, northern Louisiana and southern New Mexico.

Firms are asked whether business activity, employment, capital expenditures and other indicators increased, decreased or remained unchanged quarter/quarter and year/year. Responses are used to calculate an index for each indicator, calculated by subtracting the percentage of respondents reporting a decrease from the percentage reporting an increase.

“The majority of respondents reported business activity was stable from first quarter levels, while nearly a third reported activity expanded,” researchers said. “Most other survey indicators were less negative, suggesting some moderation of the strong declines reported in the first quarter. Outlooks improved or held steady for most firms, in a marked shift from last quarter.”

Data were collected June 15-23, with 152 responding to the survey, including 67 exploration and production (E&P) companies and 85 oil and gas support services firms.

Oil and gas support services firms reported that declines in equipment use mostly abated in the second quarter, with the equipment utilization index rising more than 50 points to come in just below zero, at minus 1.2. The prices received for services index pushed up more than 25 points to minus 32.1, but “the still-negative reading suggests demand for oil and gas support services remained depressed.”

Labor market indicators suggested that the loss of jobs, hours and compensation continued between April and June but were less widespread. The employment index moved up to minus 19.7, with 11% noting net hiring and 31% net layoffs. The employee hours and wages and benefits indexes also rose “but remained contractionary” at minus 16.5 and minus 18.4, respectively.

Capital spending declines also moderated in 2Q2016, particularly among oilfield services firms. The aggregate capital expenditures index came in at minus 9.3, up markedly from minus 46.6 in 1Q2016, when nearly 60% of firms reported lower spending. In the second quarter that share was cut in half, to roughly 30%.

“Outlooks six months out improved, with the index coming in at 19.0, a pronounced reversal from minus 24.5 last quarter,” the survey noted. “Outlooks were particularly optimistic among E&P firms, with nearly half reporting their view had improved. Reflecting this, the index of expected E&P capital spending in 2017 jumped 40 points to 25.4, suggesting producers have revised upward their expenditure estimates for next year.”

Respondents also remained bullish on prices, with more than 70% expecting oil will fetch a higher price one year from now, and more than 50% forecasting higher natural gas prices.