Stockpiles of U.S. crude fell to a 2021 low last week after production eased and demand for petroleum products continued to climb – another in a string of indicators pointing to a tightening oil market. 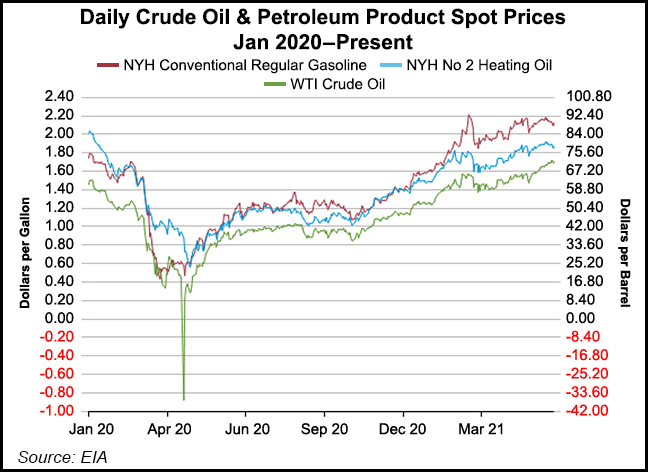 Domestic commercial crude inventories in the week ended June 18, excluding those in the Strategic Petroleum Reserve, decreased by 7.6 million bbl from the previous week, the U.S. Energy Information Administration (EIA) said Wednesday. At 459.1 million bbl, stocks were 6% below the five-year average.

Production last week declined by 100,000 bbl and averaged 11.1 million b/d, EIA’s Weekly Petroleum Status Report showed. It held close to the 2021 high of 11.2 million b/d, but remained far below the 2020 peak of 13.1 million b/d reached in March. U.S. shale drillers are under pressure from investors to keep spending in check.

With U.S. production flattish and global demand rising in tandem with U.S. consumption, Rystad Energy analysts said Wednesday the Organization of Petroleum Exporting Countries and its oil-producing allies, aka OPEC-plus, could further boost production in August to address imbalances and capitalize on higher prices. Brent crude, the international benchmark, this week hit $75/bbl for the first time since prior to the pandemic.

OPEC-plus is currently adding more than 2 million b/d into the global market, a process started in May and scheduled to carry through July. Goldman Sachs analysts, however, estimated that global demand had increased by 2 million b/d over the past month, more than offsetting the cartel’s increases to date.

The Saudi-led cartel meets next week to decide next steps on production. Early analyst estimates hover around an additional monthly increase of about 500,000 bbl in August and potentially ensuing months, according to Mizuho Securities USA LLC’s Robert Yawger, director of energy futures. OPEC-plus policymakers are scheduled to meet July 1.

OPEC, however, expects global oil demand to increase by about 6 million b/d in the second half of this year.

“Even with supply increases on the horizon, improving demand will be hard to fight,” analysts at Raymond James & Associates Inc. said Wednesday.

OPEC-plus cut output by 9.7 million b/d early last year after the pandemic gripped the globe, froze travel and decimated demand. Cartel additions made since oil demand started to recover last summer are set to total about 4 million b/d at the end of July.