Demand for petroleum products mounted early in October, cutting into U.S. inventories of crude and refined products, but a resurgence of the coronavirus pandemic across swaths of the Lower 48 and Europe threaten to thwart the trend and weigh down oil prices. 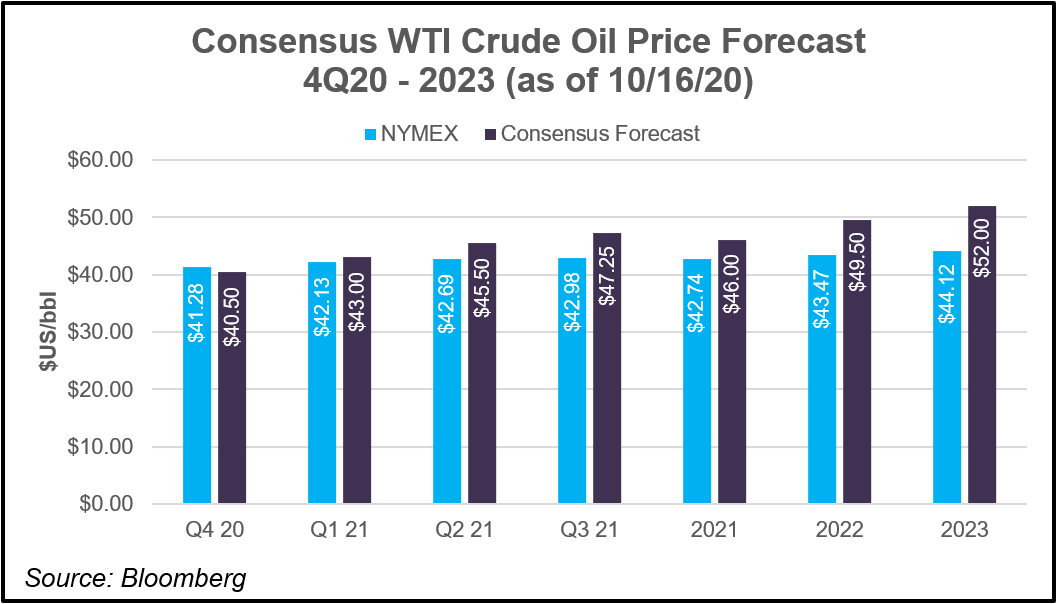 Demand for fuel derived from oil was crushed earlier this year by the global lockdowns imposed to slow the spread of the virus. As countries gradually reopened economies, activity and travel gathered momentum and, in recent weeks, started to hasten and result in greater demand for oil, the U.S. Energy Information Administration (EIA) said in its latest Weekly Petroleum Status Report (WPSR).

EIA said for the week ending Oct. 9 demand increased 6% week/week – following a 5% jump the prior week – resulting in a 17 million bbl decrease to total U.S. inventories of crude and refined products. That marked the largest decline since the week ending Feb. 22, 2019.

“Traffic – cars, planes – it’s still lighter than it was” prior to the pandemic, “but I think you are seeing more activity and the demand reflects that,” Mike Matousek, a stocks and commodities trader at U.S. Global Investors, told NGI. “But it’s anyone’s guess if that can continue.”

Indeed, domestic consumption of gasoline and jet fuel – important contributors to the recent petroleum demand advances – are vulnerable to new waves of virus outbreaks in the U.S. Midwest and overseas. With cases spiking, London, Paris and other cities are already imposing tighter restrictions. Oil prices, by extension, could come under renewed pressure if demand wanes.

“There are many instances of governments re-imposing lockdowns as COVID metrics noticeably worsen heading into the winter in the Northern Hemisphere,” Raymond James analysts said. “We are concerned about heightened impact on demand from more widespread lockdowns this winter.”

Looming threats are particularly problematic for oil because, while demand climbed in recent weeks, it is still well below pre-pandemic levels. The latest WPSR showed weekly gains, but year/year demand was down 7%. Gasoline demand was off 8%; jet fuel was down 27%, and residual fuel – used in power plant furnaces and industrial boilers – was down 41% from a year earlier, according to EIA.

Overall, on a four-week moving average basis, there was a 12.5% year/year decrease in total demand.

Rystad Energy oil market analyst Paola Rodriguez-Masiu said the week/week demand bump was a “clear bright spot.” However, “the pandemic’s second wave is here and the world is at a stage where new curfews are being re-imposed, effectively restricting traffic and with it demand for road fuels…Although we will not likely enter such deep lockdowns like in the pandemic’s first wave, we still see restrictions again, and they do have an effect in every aspect of our lives, including fuel consumption.”

Meanwhile, supplies remain elevated. U.S. commercial crude oil inventories — excluding those in the Strategic Petroleum Reserve — decreased by 3.8 million bbl week/week, according to the latest WPSR. However, at 489.1 million bbl, inventories are about 11% above the five-year average.

Globally, demand is expected to recover more notably in 2021 while supply moves down, but the latest forecast from the Organization of the Petroleum Exporting Countries (OPEC) has dimmed some along with coronavirus spikes.

OPEC said in its latest monthly outlook that total demand will rise by 6.54 million b/d next year to 96.84 million b/d; that is 80,000 b/d less than it expected just one month earlier.

While virus-related lockdowns eased and demand began to recover in the third quarter, OPEC expects economic activity – and energy demand – to slow in coming months.

“While the 3Q2020 recovery in some economies was impressive, the near-term trend remains fragile amid a variety of ongoing uncertainties, especially the near-term trajectory of COVID-19,” OPEC said in the outlook.

OPEC has lowered its 2021 oil demand forecast several times since it predicted a 7 million b/d increase in July. For all of 2020, it expects global oil use to drop 9.47 million b/d from a year earlier.

“It’s not ugly anymore – at least it hasn’t been recently,” Jacob Thompson, a managing director at SAMCO Capital Markets in Dallas, told NGI. “But for oil prices to hold up and continue to improve, we certainly can’t take another demand shock right now.”

To address weak demand, the Saudi-led oil cartel and its allies, aka OPEC-plus, agreed to a record supply cut starting in May.

EIA data show that total crude production decreased by 6.0 million b/d from April to May as a result of the deal, marking the largest monthly decline since 1993. Compared with January 2020 total petroleum liquids production, partner countries’ output fell by an estimated 5.9 million b/d in May, 7.9 million b/d in June and 7.1 million b/d in July before the pace started to moderate in August.

Long term, the industry’s outlook is murky. BP plc said in September, for example, that global oil demand may have peaked ahead of the pandemic. This is due in part to shifts in demand to cleaner sources of energy and recent commitments by the likes of BP and Royal Dutch Shell plc to diversify more rapidly into renewables.Matousek said long-term investors are increasingly focusing on solar, wind and other perpetual sources of energy. “Oil and gas are not just going away – and I think they’ll be more of a sustained recovery once we get a vaccine. But people are giving a lot of attention to renewables,” he said.