U.S. oil and gas drilling permits climbed 23% year/year in October and were up 39% from September, a strong sign that activity is likely to improve early next year, Evercore ISI said Thursday. 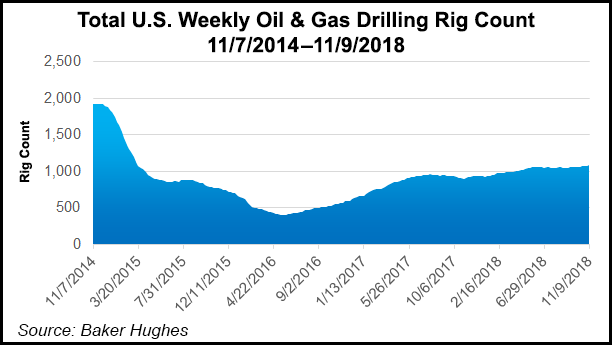 All major states and the Department of Interior’s Bureau of Ocean Energy Management require drilling permits to be filed and approved before an exploration and production company may drill a well or bypass/sidetrack an existing well. Land permits usually are submitted to individual state regulators, while offshore/Alaska permits are reviewed and approved by the Bureau of Safety and Environmental Enforcement.

According to the compiled data, a total of 4,820 U.S. permits were issued last month, a sharp uptick both month/month and year/year, said analyst James West and his team.

“This suggests drilling activity should improve in early 2019,” West said. “We continue to believe the high spec rig count will remain fully utilized for the foreseeable future.”

In fact, during the first two weeks of November, Evercore reported that a total of 2,849 onshore permits and four new Gulf of Mexico (GOM) plans were issued.

The data has continued to indicate a steady increase in rig permits, which through October increased 3% on a compound annual growth rate over 2015-2018. The latest numbers, however, are below the year-to-date peak of 5,586 in March.

A “significant” uptick in permitting during October versus September was reported in Wyoming (106%), Colorado (48%) and in Texas (15%), while Nevada permitting fell 100%, New York was off by 75% and Nebraska permitting from September declined by 71%.

“Meanwhile, the number of new exploration plans filed in the GOM in October totaled two (from one in September), and operators filed plans for 16 new wells, up from plans to drill three wells in September,” West said.