The collapse in drilling activity deepened in April, with permitting for oil and natural gas wells at a record low, but there are glimmers of gains so far this month, according to an analysis by Evercore ISI. 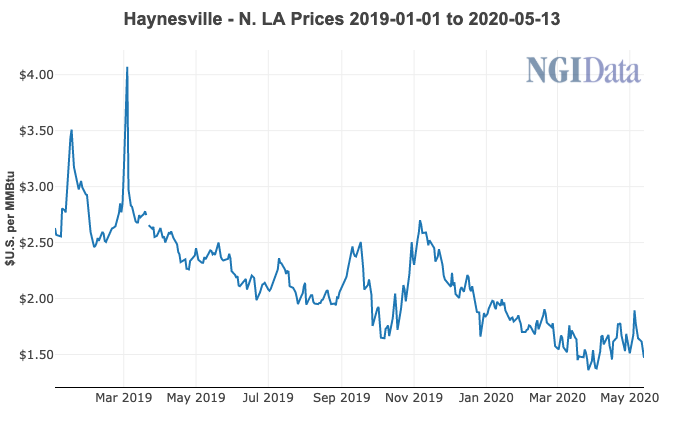 The analysis led by James West compiles data from state and federal officials for a deep dive of where permitting is underway and where it has fallen. April permitting was less a bump in the road and more like a train wreck.

However, April showers may be bringing May flowers, the data indicated. Using week/week (w/w) data, Evercore said oil permits climbed 19% from the final week of April to 166 in the first week of May. The Permian Basin accounted for the most permits early this month, rebounding to 100, up by 35 from the week before. The gain was partly offset by the Eagle Ford Shale, with six fewer permits, and the Mississippian Lime, down by seven.

Still, natural gas permits “strengthened to 39,” a 64% gain w/w, “as a result of resilience in the Haynesville Shale,” which added 15 permits. Permitting in other onshore plays dropped to 65, down by 37 from late March.

For natural gas, permitting has been hit and miss since the start of the year, according to Evercore.

Marcellus Shale permitting plunged by 44% through April year/year and was down by 20% from March to 169. The Utica Shale, a mix of gas and liquids, saw a month/month (m/m) decline of 14 permits.

However, the Haynesville, second to the Marcellus in dry gas production, posted a slight recovery from March, with permits up by 13.

In Texas, where the bulk of the country’s oil and gas is produced, permitting moved to its lowest count in more than 10 years during April and fell 28% year to date, Evercore said.

Permits by the oil and gas majors, which dominate in the Permian, were off in the first four months by 25% from the same period in 2019.

For individual plays, the m/m declines were led by the Permian, off 159 from March, and in the Eagle Ford Shale, down by 74. Lower permit counts also were reported in the Granite Wash formation, down by 16, and in the Barnett Shale, off 13.

Wells permitted during April in the West Texas portion of the Permian “declined to 504 (minus 24% m/m) due to curtailments in Howard, Reeves, Loving and Midland counties, where aggregate permit applications declined to 144 (minus 128 m/m).”

Contributing to the decline in permits during April was the pullback by some of the biggest operators in Texas, including EOG Resources Inc., which requested 26 fewer permits than in May. ExxonMobil’s requests were down 26 m/m, while Permian pure-play Diamondback Energy Inc. had 18 fewer requests. BP plc requested seven fewer permits than in March.

In the Eagle Ford, the second largest play in Texas, permitting contracted in April to 94, off 44% m/m.

State regulators granted authorization to drill 480 oil and gas wells in the Permian, with the New Mexico portion accounting for 46% of the activity, West said. New Mexico activity was driven lower by public operators, whose permit applications fell to 142 in April, down by 19 m/m.

Through April, overall drilling permits across the country fell by 61% year/year to 8,751.

“The majors have reduced permit applications by 24% year/year in the Permian, while wells approved for large-caps have declined to 547,” off by 5%, said West.

Private operators in the Permian had cut their permit count through April by 6% to 1,424.

Meanwhile, Evercore’s analysis said more wells are being plugged and abandoned. In the Bakken Shale, permits to plug were up by 14 in April over a three-month period, and they were two higher than in March. Operators also plugged 1,532 wells in Texas, moving up by 776 from March.

For water disposal wells used in oil and gas development, the Railroad Commission of Texas approved 15 in April, a gain of 25 m/m, with no permits granted by New Mexico regulators. The Marcellus and the Green River Basin each received a permit for disposal wells, while the Denver-Julesburg/Niobrara permits rose to six from zero.