Consolidation in the U.S. upstream sector slowed to a relative crawl in the first quarter after rallying late in 2020. But there have been signs of increased activity in April and potential catalysts for more deals as the year wears on, according to an Enverus analysis. 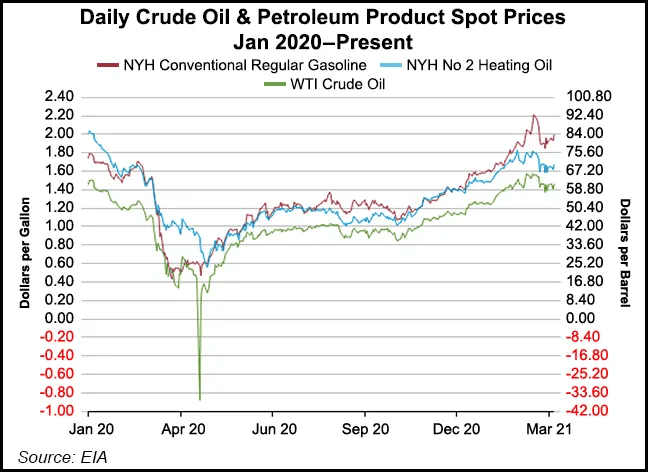 The oil and gas analytics company’s summary of 1Q2021 merger and acquisition (M&A) activity showed $3.4 billion in deal value announced, an 88% drop from the final quarter of 2020. There were a total of 25 deals announced in the quarter, down from 46 the prior period.

Globally, volume declined to 76 deals in the first quarter, compared with 107 in 4Q2020, Enverus’ tally shows.

First quarter Lower 48 activity focused mostly on production-heavy assets in legacy oil plays, as crude prices recovered and expectations for stronger demand post-pandemic strengthened. Combined, M&A involving sellers in the Bakken and Eagle Ford shales accounted for two-thirds of total deal value in the quarter. No deal in the quarter carried a value greater than $1 billion at announcement.

The top two deals of the quarter by value were both acquisitions by private equity-sponsored energy and production (E&P) firms. One was Equinor ASA’s $900 million deal to sell its Williston Basin assets in Montana and North Dakota to EnCap Investments-backed Grayson Mill Energy. The other was one by Validus Energy in its $880 million Eagle Ford purchase of Ovintiv Inc. Validus is sponsored by Pontem Energy Capital and other investors.

The U.S. Energy Information Administration (EIA) estimated that global petroleum and liquid fuels demand would average 97.7 million b/d for 2021, up 5.5 million b/d from 2020 levels. The agency expects U.S. crude production will average 10.9 million b/d in the second quarter of 2021 and increase to nearly 11.4 million b/d by the end of the year.

The outlook is based on expectations for effective coronavirus vaccination programs in the first half of 2021, with stronger economic activity and increased demand for travel fuels derived from oil over the third and fourth quarters. After plunging into negative territory amid the onset of the pandemic, Brent crude prices have recently held above $60/bbl.

“The news is positive and you are seeing buyer confidence improve as a result,” Enverus M&A analyst Andrew Dittmar told NGI’s Shale Daily.

He said while activity was light in the first quarter, it was up notably from a year earlier, when the pandemic arrived and total deal value was just $600 million. Dittmar also said when there is a shift in oil prices, it takes time for buyers and sellers to reset expectations around M&A pricing. He thinks that reset has begun and more deal announcements will accumulate this year.

“The strength and stability we’ve seen with oil prices helps, and I do think activity is going to pick up from here,” Dittmar said.

He noted that, while most 2021 forecasts for natural gas are bullish, the push for scale and cost efficiencies that accompany M&A is notably more urgent among companies in the oil patch. Natural gas companies accounted for less than 10% of deal value in the first quarter and less than 5% in 4Q2020, he said.

EIA this month estimated that Henry Hub prices would average $2.73/MMBtu this year – well above the 2020 average of $2.03. The agency cited modest growth in production and strong demand for U.S. liquified natural gas exports.

“After most of 2020’s activity was dominated by mergers between public companies, we are seeing private equity play a more prominent role in M&A markets in 2021,” Dittmar said. “Following years of heavy investment in unconventional resources, private E&Ps were having a challenging time finding exits.” In recent months, however, “we have seen several prominent exits plus new investments from the private side of the industry.”

That noted, public company consolidation is hardly finished for the current cycle, he said. “While many of the marquee names in the public E&P space in the Permian found deals in 2020, there is additional room to combine operations among small and mid-size Permian names as well as in areas like the Appalachian Basin and Bakken that have yet to see anyone play a dominant role as consolidator,” Dittmar said.