Selling onshore U.S. oil and natural gas assets proved more difficult during the first quarter, and properties for sale, mostly in the Permian Basin, have declined as operators cautiously prowl for buyers, according to Drillinginfo. 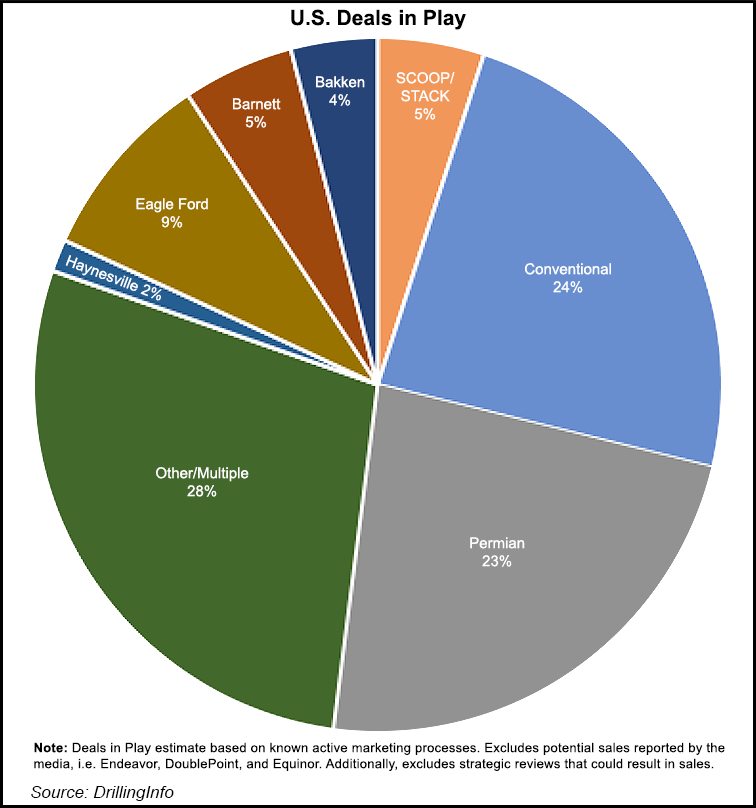 Domestic merger and acquisition (M&A) deal values plunged to a record 10-year low in the first three months, the Austin, TX-based data analytics company said Thursday. The slump that began late last year carried into the new year, with 1Q2019 dealmaking by exploration and production (E&P) companies and other operators falling to $1.6 billion, down 91% sequentially and 93% year/year.

The turnaround followed a total of $82 billion in M&A activity during 2018, which was a four-year record high.

“The market for upstream deals came to a halt in late 2018 with the combined pullback in oil prices and equities,” said Drillinginfo M&A analyst Andrew Dittmar. “Since then, oil has rebounded by 20% and E&P stocks are up 15%, albeit with nearly all those stock price gains taking place in early January. However, deals haven’t returned in a meaningful way and we believe that is being largely driven by Wall Street.”

For the second quarter, activity is forecast to remain fairly slow, with possibly a slight rebound. Likely deals may be drillcos and joint ventures (JV) that would be used to plug funding gaps beyond debt and equity. Unlike standard JVs between operators, drillco funding often includes a financial backer committing to successive cash tranches to cover development in a specific area.

“Look for some public companies to be consolidated/bought out,” while struggling operators without a “ready” buyer could be forced to restructure, as many resorted to during the downturn of 2015-2016, analysts said.

“The pace of a comeback in the A&D markets is dependent upon a reversal of sentiment by Wall Street toward the E&P sector,” analysts said.

The firm’s team of researchers had predicted deal values would decline in the new year following the rapid 40% drop in oil prices during late 2018.

“The primary contributing factor appears to be Wall Street’s pressure to deliver on free cash flow and weak equity and debt markets available to fund deals. Meanwhile, private equity, which has in recent cycles stepped in as an opportunistic buyer to take advantage of pullbacks by public E&Ps, has largely sat on the sidelines.”

The lack of buying enthusiasm appears to be changing the game plan for would-be sellers.

There are significant assets for sale, including BP plc’s intention to sell some noncore U.S. properties. Other operators are using “soft” marketing processes that only tap into select potential buyers.

“This is particularly true for private equity-backed E&Ps, which have historically been selective in choosing their entry and exit points,” analysts said. “While some smaller positions may be sold or merged into larger portfolio companies, these firms have no intention to give away their prime positions in major plays during a down market. The key inflection point for U.S. land operators is to obtain positive, sustainable” free cash flow.

“In theory, the current struggles of smaller E&Ps sets the stage for consolidation, with larger players able to leverage premium valuations and operating efficiencies to acquire smaller competitors. Whether these operators will step up remains to be seen.”

Another potential outcome could involve private capital coming to the rescue for public E&P sales if there are distressed valuation opportunities.

“Ultimately, 2019 could be a watershed year for U.S. shale,” according to Drillinginfo. “If free cash flow is reliably demonstrated, Wall Street’s approval is likely to return along with capital for deals. Given the current backlog of assets, there could be a rapid return of activity once the outlook improves.”

The largest deal during 1Q2019 came at the tail end of the quarter in late March, as Diversified Gas & Oil plc agreed to pay $400 million for HG Energy II Appalachia LLC’s gas wells in Pennsylvania and West Virginia. The one deal helped prop up the quarterly values, making up 25% of first quarter value. Another 22% of the sales overall were for conventional properties, Drillinginfo noted.