Hunkering down for Covid-19 has led to plenty of analysis about the loss in energy demand, but Rystad Energy has put a human face on the real tragedy, determining that more than 100,000 oil and gas jobs across the United States have been lost, most within necessary support activities. 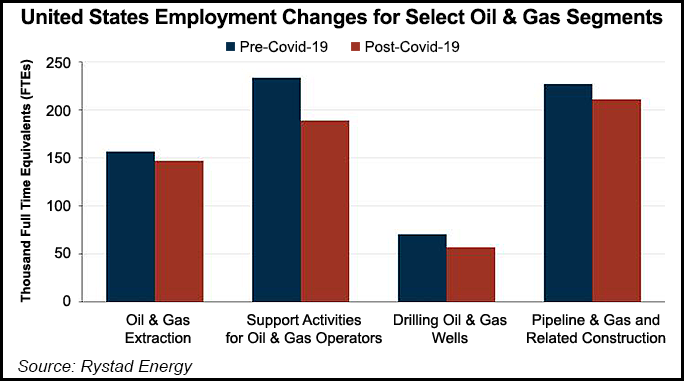 “The U.S. oil and gas labor market is amongst the world’s most severely hit by the downturn that the Covid-19 pandemic has brought,” Rystad analysts said Friday, basing their findings on data from the U.S. Bureau of Labor Statistics (BLS).

The four oil and gas segments most affected by job losses were in support activities, with an estimated 44,550 people out of work from pre-coronavirus levels of 233,550. Pipeline and related construction job losses were tallied at 16,000, down from 27,000 before the lockdowns began in February.

Within the drilling of oil and gas well job category, an estimated 13,450 people have lost their jobs, versus a pool of 79,450 before lockdowns began. Within the oil and gas extraction sector, another 9,600 people have been laid off from pre-Covid 19 levels of 156,600.

In addition to the BLS data for the four segments, Rystad included more components of the oil and gas industry chain, independently estimating job losses overall exceeding 100,000 to date. The support activities segment revealed a “staggering employment slump of 20%” from February’s pre-coronavirus levels.

“The job cuts can be attributed mainly to the nosediving oil prices driven by a sharp contraction in domestic oil demand, which has resulted in an unprecedented demand-supply imbalance,” said Rystad’s Matthew Fitzsimmons, vice president, Energy Service Research. “In response to the weakened demand, operators and service providers alike have been frantically cutting jobs.”

Heavy construction labor demand in the United States climbed by 3.4% in May, but there was no contribution from the oil and gas industry in the figures, Rystad determined.

“Since the outbreak of the pandemic in the U.S. in early February, oil and gas construction jobs have decreased by more than 10%. We believe this sector within the oil and gas industry will take a more cautious approach to new construction activity, waiting for the safety risks associated with Covid-19 to recede.”

Onshore construction workers are able to use social distancing to execute many of their tasks, but “issues arise during tool-box talks, mid-morning, lunch and mid-afternoon breaks,” analysts said. “Spreading out the times for breaks and installing additional breakout trailers to minimize the risk from these situations can result in increased indirect costs.”

Besides battling the safety risks inherent with the workflow, some large operators have delayed or canceled facility construction, analysts noted.

“In Louisiana alone, more than 40% of liquefied natural gas investments scheduled for this year have been postponed or canceled.”

An upturn in construction labor could take time because “weather windows” for building could be missed. “In addition, the weak financial stability of service companies may leave them unable to ramp up hiring fast when conditions improve,” Rystad analysts said.

In another worrisome sign, the downturn may lead to “deep pay cuts. According to our estimates, the wages for various trades in the oil and gas industry are likely to witness a decline of at least 8-10% heading into 2021.”

As wages fall and jobs are lost, analysts said many people could “migrate to other industries with overlapping skill requirements, while some senior workers may retire altogether, as we saw in the previous downturn. Combined with social distancing measures, severe restrictions on international travel and stringent immigration audits, this will adversely impact the hiring of labor once prices and demand stabilize.”

Many operators announced plans to cut back during the first quarter conference calls. The energy producing states are taking the biggest job losses, Rystad noted.

Texas has lost an estimated 45,000-plus jobs in its upstream sector since February, Rystad analysts estimated. The Texas Alliance of Energy Producers (TAEP) said upstream jobs in the state tumbled to the largest monthly decline on record during April.

Overall Texas oil and gas employment fell to a 10-year low in April. The monthly estimated upstream employment level of slightly under 180,000 jobs in April was at its lowest level since March 2010, TAEP siad. Industry employment in Texas fell to a cyclical low of 181,600 jobs in September 2016 during the 2014-2016 industry downturn.

Meanwhile, Louisiana could lose nearly 25% in its total oil and gas workforce, according to the Louisiana Oil and Gas Association.

“Overall, the impact of the job cuts would be greater for the oilfield services (OFS) sector than for exploration and production companies,” Fitzsimmons said. “OFS companies are likely to see more than 20% of its shale, onshore and offshore workforce combined cut by the downturn. While other industries have started to see labor demand embark on a road to recovery, oil and gas workers will have to wait longer for demand to increase.”