Pausing what has been a steady upward trend going back to last year, the U.S. rig count dipped one unit to 542 for the week ended Friday, driven by a small decline in onshore oil-directed activity, the latest data from Baker Hughes Co. (BKR) show. 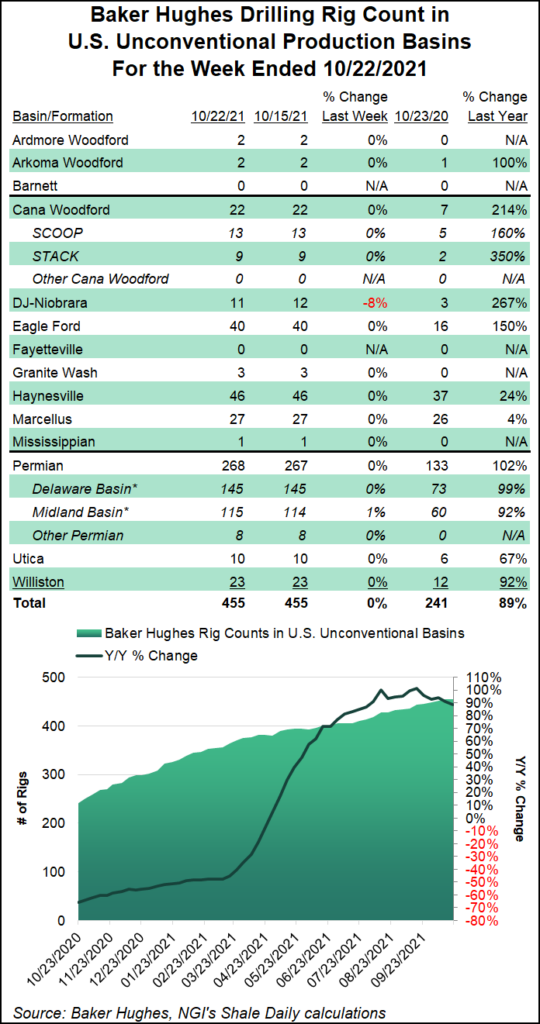 A net decline of two oil-directed rigs was partially offset by a one-rig increase in natural gas-directed drilling in the United States for the week. Even with the week/week decline, the combined 542 active U.S. rigs as of Friday far surpasses the year-ago count of 287, according to the BKR figures, which are based partly on data from Enverus.

The Gulf of Mexico count increased by one week/week to 13, while U.S. land drilling fell by two units. Two vertical units packed up shop for the week, with one horizontal rig joining the patch.

The Canadian rig count fell four units to 164 for the week, up from 83 a year ago. Changes there included a net decline of five oil-directed rigs, partially offset by the addition of one natural gas-directed rig.

Broken down by major play, the Permian Basin saw a net increase of one rig week/week, raising its total to 268. Meanwhile, the Denver Julesburg-Niobrara dropped one rig, seeing its total fall to 11.

In the state-by-state breakdown, Wyoming saw the largest net drop-off for the week, losing three rigs to fall to 15 overall. Texas and Utah each dropped one rig week/week. Elsewhere, New Mexico added two rigs for the week while California and Louisiana each added one, according to the BKR data.

Producers operating domestically could find themselves having greater access to capital this fall than they have in the recent past, according to the results of a recent survey.

Exploration and production (E&P) companies that work in the United States are expected to have more reserve-based lending capital available to them this fall versus last spring, according to the latest biannual survey conducted by Haynes and Boone LLP.

Most of the 84 respondents in the latest survey said they expect borrowing bases to grow by 10-20% in the upcoming redetermination season, with almost none predicting decreases. E&Ps accounted for 40% of the respondents, followed by oil and gas lenders (38%), professional services firms and other (4%).