Monthly employment in the oilfield services (OFS) sector surpassed 2020 levels for the first time in June, but remained well below pre-coronavirus figures logged in 2019, according to the preliminary figures from the Energy Workforce & Technology Council. 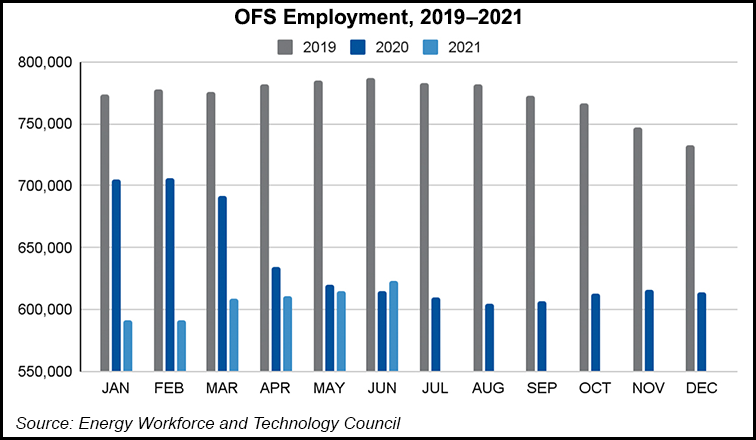 Overall, the Houston-based organization said 8,002 jobs were added in June, marking a 1.3% increase over May and a fourth consecutive month of growth. The estimates are based on monthly and quarterly employment data from the U.S. Bureau of Labor Statistics (BLS).

That brings the total number of active workers in the oilfield services sector to more than 626,000, compared to about 618,000 in May and about 615,000 one year ago, according to the analysis. However, the most recent figures still represent an 11.8% decline in OFS employment since the onset of the Covid-19 pandemic in March 2020.

“Sector employment has grown slowly in 2021 as companies have focused on reducing debt, repaying investors and investing in research and development instead of boosting production,” according to the council’s monthly report.

Meanwhile, greater efficiencies allowing production to grow while requiring fewer people to run equipment have also weighed on the job market, according to a recent report from the Federal Reserve Bank of Dallas.

Still, employment in the industry has been on an upward trend recently, according to the council’s estimates.  More than 24,000 positions were added in the second quarter after hitting a pandemic low of 591,413 jobs in February 2021, the council said. Gains from March to June bring the sector to a net increase of an estimated 9,043 jobs so far this year.

Growth was also seen in June in the oil and gas extraction, petrochemical and manufacturing subsectors.

Meanwhile, employment in the oil and gas pipeline construction segment slid in June, with 1,319 jobs lost to total 126,502. In the petroleum manufacturing space, about 110 jobs were also cut.

Growth in the services sector was also seen across the country as the number of jobs increased in each of the 12 energy-producing states the council tracks.

Texas remained the top employer of energy and technology services workers, adding 4,400 jobs in June for a total of 303,100. Upstream employment in the state has been climbing since troughing in September, according to the latest figures from the Texas Oil & Gas Association.