Employment in the U.S. oilfield services (OFS) sector ticked up in May as growth in support roles and equipment fabrication offset declines in extraction, pipeline construction and manufacturing, according to estimates by the Energy Workforce & Technology Council. 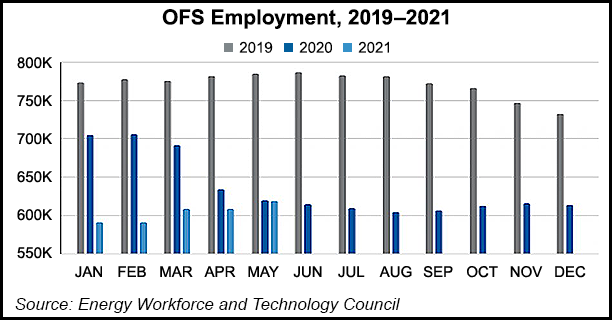 The sector grew by 1.6% in May, racking up an additional 9,707 jobs over April, according to the Council’s figures. The estimates are based on monthly and quarterly employment data from the U.S. Bureau of Labor Statistics (BLS).

“Sector employment has remained fairly flat in 2021 as companies have focused on reducing debt, repaying investors and focusing on research and development instead of boosting production,” according to the monthly report. The organization represents 600 member companies in the OFS sector.

Broken down by sub-sector, oil and gas extraction jobs took the biggest hit and fell by 1,200 month/month, to 135,500 despite a climbing rig count and higher commodity prices, according to preliminary BLS data. Meanwhile, the Council estimated big gains in the fabricated metal products sector with 7,609 oil and gas-related jobs added. The number of jobs in support activities also climbed, adding 4,261.

Those trends track with what the Council is seeing in the field as exploration and production (E&P) companies focus on their backlog of drilled uncompleted wells (DUC) over drilling new wells, lead researcher Kevin Broom told NGI.

“I would anticipate extraction jobs rising in the future as companies increase production,” he said.

Meanwhile, pipeline construction shed 665 jobs while the oil and gas industry’s share of machinery manufacturing dropped 226 jobs. The number of jobs related to petroleum manufacturing fell by 40, while petrochemical manufacturing jobs fell by 33, according to estimates.

Employment in the industry has been on an upward track recently, with more than 27,000 jobs added over the past three months after hitting a low of 591,413 jobs in February, according to estimates. Nearly 17,700 jobs were added in March and April.

However, employment in the OFS, E&P and related sectors is down 13.8% since operators began reducing activity in the spring of 2020 after the Covid-19 pandemic reduced demand. The Council estimated a peak of nearly 102,000 pandemic-related job losses, about 14,000 of which have been restored.

Oil and gas powerhouse Texas was the top state for OFS employment, with 303,000 jobs, according to the Council. Louisiana was a distant second with 51,800 and Oklahoma third with 47,300.

Overall, OFS employment stood at an estimated 618,792 jobs in May, roughly the same as year-ago levels, according to calculations.