Despite the warmest winter on record, U.S. natural gas liquids (NGL) prices are recovering faster than crude oil, thanks in large part to strong growth in propane and butane exports and slowing domestic shale gas production, according to report by BofA Merrill Lynch Global Research. 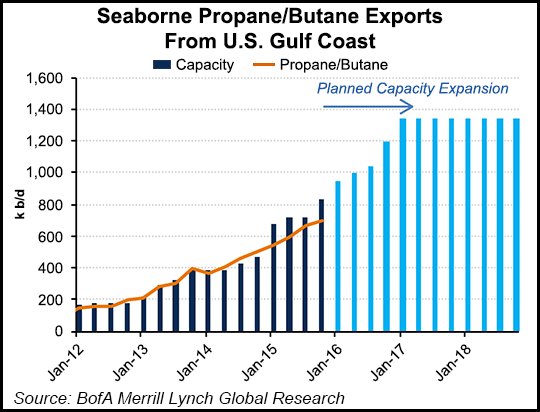 In its report, “The American Propane Armada,” released Thursday, BofA analysts said that since mid-January, domestic propane prices have rebounded 62%, from 29 to 47 cents/gal. By comparison, during the same time frame butane and natural gasoline prices have increased 33% and 26%, respectively. But when NGL prices are weighted as a percentage of West Texas Intermediate (WTI) crude, the ratio surged over the last nine months.

“True, the rebound in the second half of 2015 was driven mainly by the sharp decline in crude prices compared with U.S. natural gas — and therefore ethane too,” the BofA analysts said. “Yet since the beginning of the year, the intrinsic improvement has been driven by tighter NGL fundamentals, especially on the demand side, as U.S. NGL as sendouts have grown relentlessly on a drastic expansion of U.S. export capacity.”

“This exports boom has been made possible due to a combination of low NGL prices compared to the international market and a drastic expansion of U.S. liquefied petroleum gas (LPG) export capacity,” the BofA analysts said, citing in part the recent expansion of Enterprise Products Partners LP’s export terminal capacity last December by 230,000 b/d, to 650,000 b/d (see Daily GPI, Oct. 30, 2015). With two additional export terminals scheduled to come online within the next nine months, BofA projects total export capacity will increase from the current capacity of 830,000 b/d to 1.3 million b/d by the end of 2016.

“As such, LPG export capacity is unlikely to be the constraint that it has been in the past five years,” BofA said.

The report found that low persistently commodity prices and the subsequent decline in the rig count was causing U.S. production of heavy NGLs to level off. Last December, total U.S. NGL output declined on a monthly basis, and November’s figures were largely unchanged from October.

“With the EIA [Energy Information Administration] now forecasting crude production to drop by 760,000 b/d this year and by an additional 480,000 b/d in 2017, further and sharper NGLs declines look to be on their way.”

PADD 3, one of EIA’s Petroleum Administration for Defense Districts, covers the Gulf Coast.

But BofA said ethane was another story, since ethane production often derives from shale gas, its production is dictated by takeaway capacity expansions and it also fluctuates with ethane rejection.

Propane stocks have fallen more than what was expected during the winter season, BofA said, due to a combination of higher demand for propane exports and declining production. The report found propane inventories deviated from the five-year maximum by falling from 27 million bbl in mid-November to 10 million bbl today.

BofA said it had a guarded outlook for the future of butane, but saw propane continuing to strengthen. Although propane withdrawals were higher than expected, stocks remained above the five-year maximum for this time of year. The forecast for warmer weather was also expected to drive down domestic demand until May.

“These two factors, combined with export growth to China potentially fading, could weaken U.S. propane fundamentals in the coming months,” BofA said. “Yet the fact that U.S. propane stocks have fallen on reduced supplies and surging demand implies a tighter propane market as we head into next winter…

“We retain, however a more bearish view on butane, as U.S. refiners enter their maintenance season, and start to shift from winter to summer gasoline production, implying less blending demand for butane seasonally.”

BofA said that if crude oil prices rise to $47/bbl by mid-2016, butane and propane prices will also increase. The report added that ethane prices should remain tied to U.S. natural gas prices, at least until new ethane crackers come online in 2017. Those projects are likely to include an agreement by Ineos to use ethane from U.S. shale gas to supply a plant in Scotland (see Shale Daily, Nov. 10, 2015), and plans by Indorama Ventures to renovate and restart a dormant ethane cracker near Lake Charles, LA (see Daily GPI, Sept. 24, 2015). Additional capacity expansions in Texas are scheduled to come online around 2017 (see Daily GPI, March 31, 2015).

“LNG could act as a true cap on liquids prices next winter on extensive switching capacity,” BofA said. “But the fact is U.S. propane stocks have fallen on reduced supplies and surging demand. The curve is now in backwardation. The first bull market in the petroleum complex has emerged.”

According to EIA, the Mont Belvieu, TX, spot price for propane has been climbing for at least the last six consecutive weeks, from 33 cents/gal on Jan. 29 to 43.3 cents/gal on March 4. EIA said propane closed at 47 cents/gal on Thursday.

The National Oceanic and Atmospheric Administration (NOAA) reported earlier this month that the El Nino in place since November is dissipating, and on Tuesday announced that the period from December 2015 through February 2016 was the warmest winter on record (see Daily GPI, March 2).