Nine of the largest natural gas-focused U.S. onshore explorers remain “fully committed” to aggressive capital spending plans they laid out earlier this year, with total 2017 spend increased by 59% year/year to $8.87 billion, according to an analysis by RBN Energy LLC. 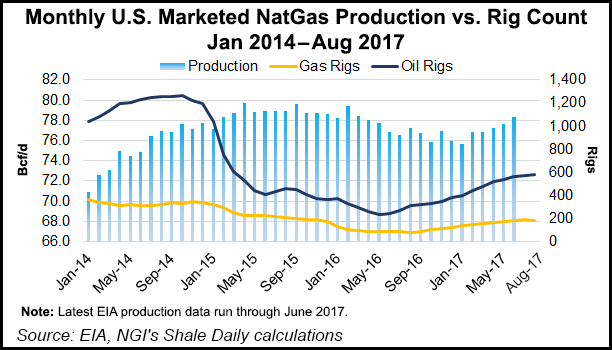 The gas-weighted exploration and production (E&P) capital expenditures (capex) are 44% higher than spending announced by the oil-weighted peer group and 29% more than the diversified E&P group, RBN’s survey of 43 U.S.-based producers determined.

In RBN’s market study of 43 domestic E&Ps, researchers examined the strategies being adopted with prices averaging $50/bbl crude oil and $3/MMBtu natural gas. Within that 43-company universe 21 are oil-focused, 60%-plus weighted to liquids, while nine are 60%-plus gas-weighted.

The nine reviewed gas-weighted producers now are budgeting $8.9 billion in upstream capex in 2017, marginally higher from an initial estimate of $8.8 billion.

Only Marcellus Shale heavyweight Rice Energy Inc., which is being acquired by EQT Corp., announced it would reduce 2017 capex, down $70 million. However, Rice’s capex cut is “more than offset” by two E&Ps that increased their budgets by a total of $118 million while six operators left their initial guidance unchanged. Antero Resources Corp. and EQT have the two highest capex budgets in Appalachia at $1.3 billion each.

The total 2017 production forecast for the gas-weighted group has increased 1%, or 7.1 million boe from initial production estimates to nearly 1.05 billion boe, according to RBN. That compares to a less than 1% decline for the oil-weighted peer group and a 4% decline for the diversified E&Ps.

Six of the nine gas-focused E&Ps have increased production guidance, with only one, Chesapeake Energy Corp., reducing guidance. “The projected 2017 production growth of 102.5 million boe, or 11% (compared with 2016), is nearly three times the gain between 2015 and 2016,” RBN noted.

Appalachia, as expected, is driving the increase in spending and production activity, as three-quarters of the peer group’s capex is concentrated in the Marcellus (58%) and Utica (18%) shales.

However, better drilling techniques have resulted in a nearly four-fold increase in the Haynesville rig count, to 43 in August from 11 in the spring of 2016.