Early 2023 could lead to more natural gas use than normal, with heavy snow predicted for two big oil and natural gas states, Oklahoma and Texas, according to the Farmers’ Almanac’s 2022-2023 Extended Winter Weather Forecast. 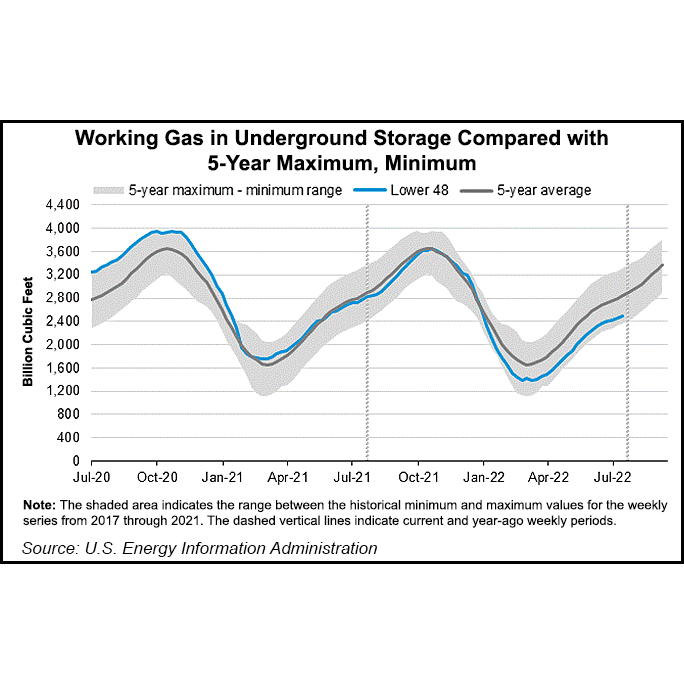 In the recently published edition, the 200-plus-year-old periodical said it expects snow and an “active storm track” to run from the Gulf of Mexico to the Northeast. Areas south, which could be clear of the snow, could still see a wintry mix.

In the first week of January, the Rockies and Plains may witness heavy snows, followed by a spell of heavy rains. It potentially could be “one of the coldest outbreaks of Arctic air we have seen in several years,” according to the Almanac.

Yet, with the winter heating months around the corner, working gas in storage for the week ending Aug. 12 was at 2.519 Tcf. That’s nearly 300 Bcf below year-ago inventories and more than 360 Bcf down compared with the five-year average. It’s also about 1 Tcf “short of the 3.5 Tcf the market largely views as sufficient ahead of the winter season,” said NGI’s Price and Markets Editor Leticia Gonzales.

U.S. storage injections were in a similar situation last year, Gonzales noted. However, “a string of larger-than-normal injections throughout the fall lifted stocks closer to the five-year average,” she said.

Likewise, current forecasts for the next few weeks show cooler weather is on the horizon, “which theoretically could lead to heftier storage injections in 2022 as well.” However, “if heat continues throughout the South Central region this fall, injections may fall short,” Gonzales said.

On the production side, “while we have seen Lower 48 output hit new highs near 98 Bcf/d, we have yet to sustain that level for more than a few days,” Gonzales added. “Pipeline maintenance events throughout the spring and summer have prevented production from holding at the higher levels needed to meet demand and replenish inventories ahead of winter.”

What’s more, “the potential return of Freeport LNG in October would add 2 Bcf/d of demand for feed gas that would be delivered to the liquefied natural gas export terminal,” Gonzales said.

A Look Into The Past?

The Almanac’s prediction of “frequent storms” bringing a mix of wintry precipitation to South Central states may serve as a reminder of Winter Storm Uri during February 2021. However, Gonzales noted that Texas regulators have since been working to improve reliability while adjusting the market structure.

The Electric Reliability Council of Texas (ERCOT) and state regulators have already made some changes, “and others are still working through the regulatory process,” Gonzales noted.

“One of the changes made was that ERCOT is now reaching out to the public earlier when demand is projected to be higher than expected. The grid operator used to make that call once conditions had gotten tight and rolling blackouts were possible. Now, ERCOT is calling for conservation earlier in the game.

“In addition, ERCOT has required certain electric generating units and transmission facilities to winterize. Most of these generators lost power during Winter Storm Uri,” Gonzales noted.

“Changes to ERCOT’s market design also have been made for pricing, ancillary services and outage schedules. In addition, some facilities are now categorized by the grid operator as critical infrastructure, meaning that ERCOT will not cut power to those facilities in the event of rolling blackouts,” Gonzales said.

In the near term, the persisting hurricane season, which officially ends Nov. 1, adds “another layer of uncertainty in the market,” Gonzales said.

Though “eerily quiet,” the Atlantic Hurricane Season is still in full swing, and “August and September traditionally are the most active months, and we’ve got a lot of time left,” she said.

“Generally speaking, the demand destruction imposed by hurricanes is given more weight in the gas market following years of onshore oil and gas development. Heavy rains from storms would likely keep temperatures in check and lower air-conditioning consumption,” Gonzales said. “At the same time, strong winds could knock out power lines.”